The whispers of Hillary Clinton 2024 have started

The democrats are pushing either Hillary, Harris. Hillary is a bigger war monger and NeoCon when it comes to foreign policy.

The whispers of Hillary Clinton 2024 have started

"Now is her moment," he wrote. "The Supreme Court's decision to overturn Roe vs. Wade creates the opening for Hillary Clinton to get out of stealth mode and start down the path toward declaring her candidacy for the 2024 Democratic presidential nomination." 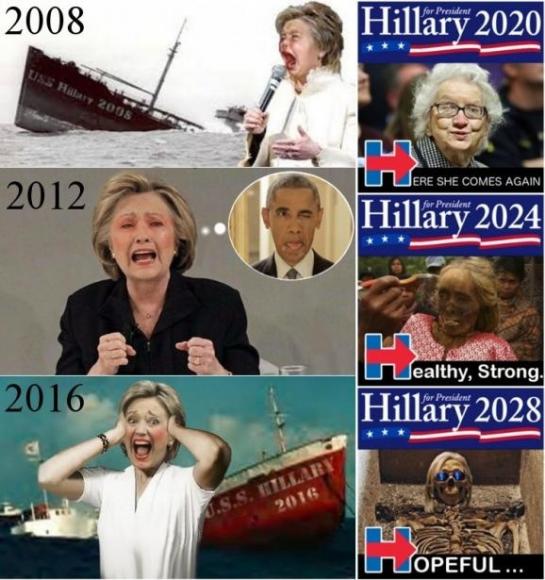 originally posted by: Axios
a reply to: vNex92


They have NO legitimate candidates they can field .
Also they realize they can't try another steal .

posted on Jul, 2 2022 @ 08:38 PM
link
Who the hell is John Ellis and why does his opinion carry such distinguished weight in the court of internet politics?

The GOP could run a house plant against her and win.

posted on Jul, 2 2022 @ 08:44 PM
link
Well it's obvious that The People haven't got their choice(s) since the beginning of US election history. Every debate groomed, every primary selected, hell even the DNC stole Bernie away in 2020. They all cheat, lie, and steal.

Nothing's shocking anymore.
Plus she is getting up there in years.

The US needs something better. The US deserves it.
Period.

originally posted by: TzarChasm
Who the hell is John Ellis and why does his opinion affect anyone's ability to evaluate a potential candidate regardless of partisan values?


Historically, the one who's in the media the most with the best line of BS will win. That takes millions of dollars, and the likes of Soros, Gates, Big Business will donate the most to whoever promises them the best deals after election.

Very few qualified unknowns would be able to get enough financial backing to make it through the primaries.

Financial backing is a persistent illusion of merit and credibility, but it's not the only way. The real obstacle is that no one with half a brain wants to take the wheel because it's going to be a very, very long 4 years for whoever replaces Biden.

No. She's not the worst. Biden was. I guess they figure if they can drag Uncle Joe over the line and con the world into thinking he won, then why not her too?

Your way late on that, she said she was going to run for President last year. They are going to try and use YOUR emotion and 'her experience' to win the election. Simply by claiming "She's the most qualified for the position, will you listen to us now?"

Should we say no, the election will be rigged to get her into office so WW3 can start. As going after Russia has been her life's goal, I will make it clear now and will point back to this post as evidence when we are dragged into a WAR we want nothing to be apart of..

If she gets into office, we will have world war 3. She will send our troops to attack Russia Directly, and it will NOT end well for us. Currently the goal is to keep the Russian/Ukraine war going until the Presidential Election occurs where she can claim victory and enter the oval office. Do NOT think for a second she will spare you because you voted for her the first time, or even the second. She will come at the American People like a rabid dog in heat.

So in the end, if she does win.. Stick your head between your legs and kiss your ass goodbye. Because none of us, including those who vote for her will see the next 4 years. ANYONE IS BETTER THEN HILLARY CLINTON; I promise you this.. as she is literally the one pulling the strings of Biden. Via his 'wife' who is besties with her.

Democrats stratagize against Americans; and how to control them and each other.

There is a quote to an article on that webpage that says in short:

"We can control men through their wives."


Which has been proven by compromising Jill Biden. As for any males, don't deny it. Your wife has control over you, even if you don't wish to admit it. When it came down to 'important' decisions, you don't make them without your 'significant other'. Trust me, it doesn't make you ANY less then a man. It in fact makes you a man, because it proves you put your wife above yourself.
edit on 2-7-2022 by BlackArrow because: (no reason given)

posted on Jul, 2 2022 @ 09:30 PM
link
a reply to: vNex92
My days of taking offense to Hillary and her madness are gone. Anyone that would consider voting for her now is a clown, but we live in a clown world where Biden is president for God’s sake and Dr. Evil runs the world through his billionaire club…nothing surprises me anymore.

With any luck a handful of Doctors survive the meltdown, I’ll provide them with venison, they provide my family with emergency care.


Also they realize they can't try another steal .

Why? If Trump couldn't stop them, who can?
Giuliani?

If you vote and your conservative, you are legitimizing an illegitimate election process. You are complicit in the steal.
The next election will be stolen and there is nothing the conservatives can do but whine and cry about it for 4 years.
They do not have the gonads, this was proven by Trump.

Go ahead Run Hillary again it will just be another wasted campaign on her part.

If Hillary was even relatable or likable she could have won in 2016 , but by the time 2024 rolls around The USA is going to so tired of the Democratic party that any Republican Candidate could win in 2024 including yes Donald Trump though no I do not want him to run.

Why not Run her , The Democrats must know they stand no chance in hell in 2024.

3 more years of Joe Biden's Administration , He already has historically the lowest polls of any president .

posted on Jul, 2 2022 @ 10:04 PM
link
Both parties need viable, personable, intelligent candidates.
Who are not on Medicare.
Have views to sincerely mend this country and Constitution.

There's a long list of people who should never be on that list.
Hillary is Number One.
Bernie is Number Two.


edit on Sat Jul 2 2022 by DontTreadOnMe because: (no reason given)

I guess it's too much for people to accept, that Joe Biden wants to be re-elected in November 2024?

originally posted by: Axios
a reply to: vNex92

The starting point for any Democrat who wants to force Joe Biden out in 2024, is they must be AGAINST Making America Great Again (aka "Anti-MAGA").

That means the candidate must be a treasonous bastard/witch to begin with.

With that as a starting point, their goose is pre-cooked.

If she loses in 2024 she will blame Russia again.

Only on twitter you would see hashtags "StillWithHer" and other hashtags.