SUCCESS must include the removal of the heads of the big media companies. They wield tremendous influence, and damage America by constantly bashing whatever and whoever is GOOD for America.

I can't stress that enough.

For example: I-Phone users get alerts from CNN that are not only pro-Democrat but anti-MAGA Republicans. Those alerts are sent out to 10's of millions of Americans by default. Turn them off...next software update, they are activated again.

originally posted by: crankyoldman
It would be helpful if folks didn't boil down the "abortion" issue to "yes it is not it isn't" but looked at it in context. 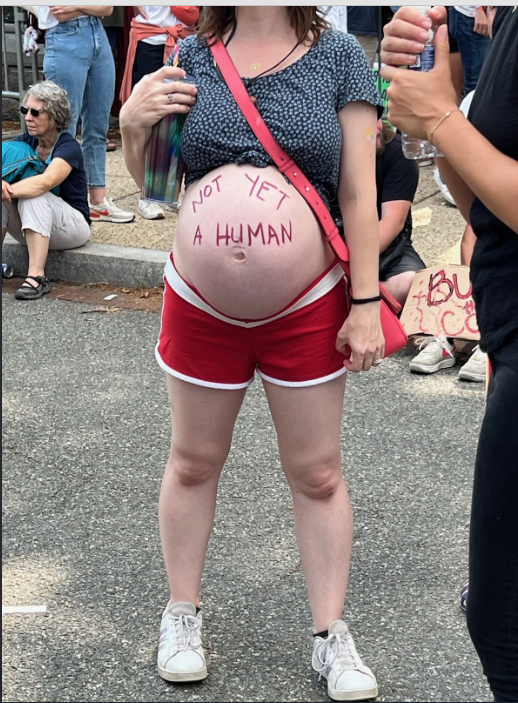 Prior to the need to rid the planet of what Planned Parenthood guru Margret Sanger called "the negro problem" ("they're like weeds") abortion was not considered birth control. Subsequent to that time, a time before most were alive, the system began to change language, unborn babies became "fetus'" and then "viable" then "parasites" and with each shift of language the Human Being in Gestation became an object, not a souled being, which, prior to Maggie Sanger's system to dealing with the Negro Problem had no common language to dehumanize a Humans In Gestation.

Prior to Maggie's arrival, folks knew how children were created, Humans in Gestation, and yes, few were "unwanted" for various reasons, but folks knew SEX led to children and folks were not VICTIMS. The arrival of "have sex with what, who when and how just be free to be" wasn't a thing. This shift is commonly blamed on the Pill and the "Summer of Love" which, remarkably, remarkably, was all just prior to the fakery that was Roe V. Wade.

In the 50 year since the lie that was Roe V. Wade, the entire story was a fabrication which, in true law, negates anything that comes after, the language has been changed to make pregnancy prevention a mystery, and, to make victims out of all that get pregnant. All, everyone is has "forced pregnancy" now, and it is their "right" to undo what horror = language change = victims. Choosing to bring a life to earth automatically makes one a victim in 2022. 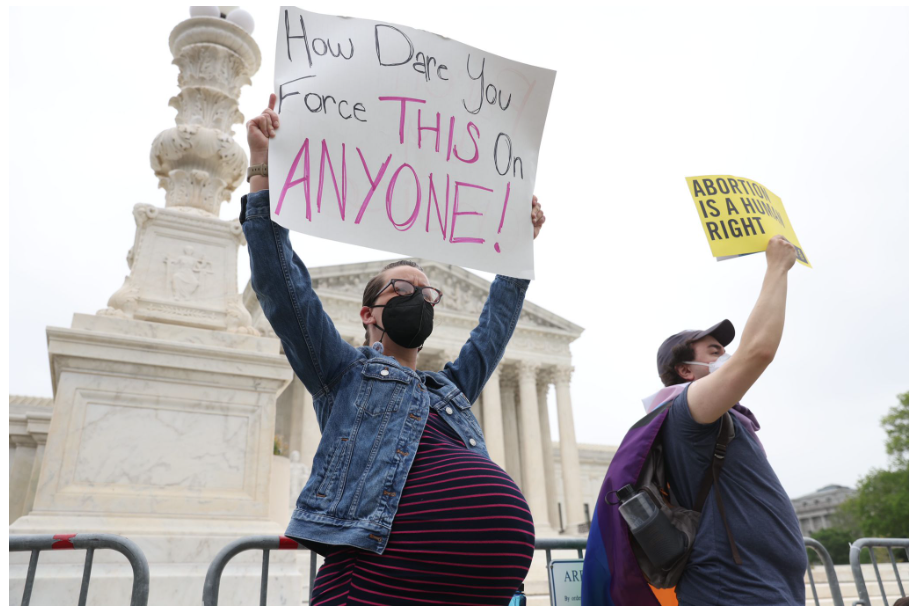 Which all makes zero sense, except we add the other components. It creates a perpetual "yes it is no it isn't" war rooted in foolish beliefs. Need proof? The Constitution says what is says, if one SINGULAR case is decided, then it means that singular case has been decided and does not AMEND the Constitution. Yet, folks actually think the document was amended to codify aborting Humans In Gestation.

Obamacare isn't a Constitutional right just because Roberts called it a tax.

So what did Roe V. Wade really do? Pay attention: "harvested stem cells" for vax, food products, cosmetics, trafficking in baby parts and more. So the fraud that was Roe vs. Wade and the subsequent mind control efforts to make killing Humans In Gestation acceptable has led to a billions dollar industry out of the body parts.

Consider that. Women who do not want a child, even for legit reasons, have that child taken away and used in products, research, consumption.

If grandad or grannie was hauled out of the house just prior to death to be turned into Soylent Green folks would loose their minds, but babies, not so much, even as they themselves consume the products.

Why Roe V. Wade was even needed. Well, again folks fail to see the point because they only consume the talking points and rarely bother to see what is happening.

Besides fulfilling Maggie's dream,,, All of the above uses for Dead Humans and their body/parts and cells is not seen as a problem nor can folks really be prosecuted.

So, doctors can "kill" Humans In Gestation and have no fear of being in trouble, they just hold their hands up and say "incest rape, woman's right to choose, my body my choice, covers me" and their moral compass is thrown away.

Doctors are to do no harm, but the "laws" have taken away their moral compass entirely and turned them into "yes" men, if it is "legal" and they can make money they are all in.

The next part it covers is to remove the Feminine nature of a woman, so an abortion is akin to throwing away the last half of an unwanted Starbucks latte. Prior to Maggie, nearly all women felt the Human In Gestation living within, many noticed the glow as the soul made appearances with the mother to be, family gathered to love and support the new comer to earth and mom. Now, woman carry a Human In Gestation for months, live with this being THEY THEMSELVES invited to earth, and then dump it without moral conflict.

It is the later that is the biggest problem. A woman who has lost her moral compass in this regard is not a woman, as it is that nurturing moral compass that makes her a woman. Instead she becomes an immoral person detached from soul. But, according to the government goons and ghouls who need to make those body parts available, she's not guilty of anything as long as a doctor does it.

Lastly. Unplanned Parenthood takes a gazillion dollars from the government, then takes that money and donates a ton of that back to the dems, in a very clever money laundering scheme that, were it in the Toxic Waste Disposal Industry that graft would have people screaming corruption, but because of the "yes it is not it isn't" mind control this action is seen as moral, reasonable and supporting a "woman's right to choose."

Did you know the racist Planned Parenthood, founded on racism, did a study in 2019 to determine if the company was racist within the workplace, and found it was? Think about that, a company founded on extermination of a race, was found to be hostile the race it was created to eliminate. Who of thunk it?

Folks need to think about to a world where this never existed, frankly, the world was better, but because most to the screaming harpies have only lived under this sick system of legalizing the trafficking in HUMAN BODY PARTS they have no idea what the world can look like and have been turned into immoral beings shilling for industries that use the dead body parts of Humans In Gestation for products and services same said aborting mothers use.

"Yes it is not it isn't" isn't a way to view anything, and viewing this topic that way is, frankly, beyond disheartening, it is criminal, or should be.

Doctors losing their moral compass probably is a big reason for that profession having such a high suicide rate over the past 20 years.

After all, most intelligent humans can't constantly take little lives, and/or do what Pharmaceuticals pay you to do, even if the drugs are more dangerous than the disease, without becoming very troubled and ultimately (correctly) deciding the world is better off without you.

originally posted by: starshift
They just should come out of the closet already and call it a satanic world order. Nevermind gas prices, moolak needs those sacrifices.
What a joke these clowns are.

It seems like more and more of them everyday are coming out to admit Satan is their personal God and Jesus is a liar to them about love. I will stick with love over hellish habits anyday.

The Biden Administration is losing so many people, the Liberal media is now ignoring the departures, and the conservative media can't keep up.

Here's a higher-level departure from Biden's sinking ship that was hard to miss, however.

White House Communications Director KATE BEDINGFIELD is getting the heck out.

People quitting, only one politician has asked Joe Biden to come to a campaign event, and Joe Biden himself angry that people are questioning his abilities and talents.

President Biden is ramping up his LIBERAL WORLD ORDER rhetoric and mentality.

For instance, yesterday Biden said in Israel that the Holocaust was to be "Honored".

Things he says which are too extreme to be accepted by most people, are explained away as "gaffs" or "mis-Speakes".

It's going to be really hard on a lot of Democrats when they learn Biden was dead serious.

posted on Jul, 13 2022 @ 11:07 PM
link
So Congress to write a bill, signed into a law by the President…is still subject to evaluation by the Supreme Court. The Constitution is very clear about death can only happen by due process. Every baby would be due a trial by jury.


But making Abortion an amendment protects it permanently. Just need 3/4 the states and 2/3 of the House and 2/3 of the Senate to agree. Then it is absolutely SCOTUS proof. Through in a rider for a $10,000 reward for killing your baby while at it. Why not?


IF ONLY more abortion doctors would listen to the little voice GOD put inside their heart and head, like Dr. John Bruchalski, an OB/GYN in Fairfax, Virginia did.


Dr. John Bruchalski is an OB/GYN in Fairfax, Virginia, who cares about women and children, which is why, after undergoing a radical transformation and path to conviction, he pivoted from killing babies in the womb to saving them.

Ever since he opened his own life-affirming practice more than 25 years ago, Bruchalski has saved the lives of hundreds of little human lives.