Republicans FLIP the 2nd Largest Hispanic District in the USA from BLUE to RED - 6.14.2022.

originally posted by: TonyS
a reply to: carewemust

Wouldn't you think of Mitt Romney as a RINO?


No, he's a democrat masquerading as a republican. Big difference.

Texas Democrats are ANGRY that voters handed a key district to a Republican female who was born in Mexico!

Democrats need to start listening to voters, instead of rolling out anti-American agendas (i.e. Drag Queen contests) and whining, 24/7.


Barr is the tooth fairy and I am Ms Santa, yep, who in the hell needs a disinformation board, the liars have been lying for decades.

LMAO,
No argument from me.......what you're describing is what I call a Democrat in a brown suit.

Yes , there is a big problem with that

I think republicans make actually have a shot to take everything if they distanced themselves from people like Mitch and Trump. M.A.G.A. is far too TRUMP obsessed.

Trump failed to drain the swamp and his four years was filled with trolling and controversy.

And feel free to disagree and say Trump was great. That doesn't matter because half the country dislikes him. Controversy and division is going to get the country nowhere. And Trump has all of that surrounding him.

If republicans could get a middle ground going and kick out the corrupt old timers. Meanwhile, if Trump had any true desire to Make American Great Again, then he would not run again and give support to Republicans who want to work together with moderate democrats who want a better American. Not political agendas and war.

Maybe focus on your own party lol. I think YOU not republicans are trump obsessed. Why not focus on having the dems get a middle ground going and kick out corrupt old timers?

Let's change the Constitution so she can (unlike BHO) LEGALLY be President or Vice-President.

originally posted by: CptGreenTea
a reply to: tanstaafl

Good try though, because you and I both know that any example I might give will include many aspects that I am obviously NOT including. Just for one recent example, if I said 'the economy of the 50's', meaning when a man could easily and single-handedly provide for his entire family on his individual income allowing Mom to stay home and be a Mom and take care of the kids, obviously there are some aspects of the 50s that I would NOT be including that you would gleefully point to to try to invalidate my reference, ie the bigotry and real actual systemic racism being imposed almost entirely by your very good friends the democrats in power at the time, but the biggest one that I'm sure even you are blissfully unaware of (and likely still are): the massive fake studies being used to commit the largest yet almost unknown false flag against Americans health the world has ever seen - promoting huge lies (provably, demonstrably false by irrefutable evidence going back even to before our country was founded) regarding what constitutes a healthy diet, the biggest example being that animal protein and saturated fats are unhealthy and the new disgusting and extraordinarily unhealthy seed oils were healthy, when the reverse is the real truth.


I think most people will settle for being like 2019 when inflation was less then 2%, gasoline averaged 2.60 a gallon, and there wasn't a tampon and babby formula shortage.
edit on 19-6-2022 by dandandat2 because: (no reason given)

Well i dont think anyone is saying animal protein by itself is bad in moderation. It's just usually sourced very unethically. And too much saturated fat is unhealthy for your heart.

Whole food diets low or no meats and saturated fats have been proven to be very healthy.

There is no time when America was unilaterally great. So the slogan is just having this undefined nostalgia for a time that never was.

originally posted by: CptGreenTea
a reply to: tanstaafl

Well i dont think anyone is saying animal protein by itself is bad in moderation.


Then you haven't been paying attention.


Not nearly as much as the vegetarian/vegan loons would have you believe.

And too much saturated fat is unhealthy for your heart.


Nope, that is one of the many myths that are now proven to be pure fiction, bought and paid for propaganda by the anti-meat lobby (essentially the large commercial food industry with the enthusiastic participation of the looney-tunes vegetarian/vegan brigade).

Whole food diets low or no meats and saturated fats have been proven to be very healthy.


Again, pure myth bought and paid for by the large commercial food industry.

There is no time when America was unilaterally great.


Unilaterally, meaning 'perfect'? Of course... and the same can be said of every other country that has ever existed, because perfection can not and never will be...

So the slogan is just having this undefined nostalgia for a time that never was.

The damage Democrats, led by President Joe Biden, are doing to America are being felt more each week, and elections across the country are allowing Americans to reveal how unhappy they are with what Biden/Democrats are delivering.

Take tonight for example. In addition to the usual MAGA Republican candidates winning their respective primaries across various states, we also have a huge indicator of what is going to happen to DEMOCRATS in November's mid-term elections..

Her success is a hard-fought victory for Republicans, who have been fiercely targeting South Texas since making inroads there in 2020. The national party has poured money and resources into the district, believing that a Flores win on Tuesday is an early indication that they can take back the U.S. House of Representatives in November.

“This historic win will bring back God to the halls of Congress!” tweeted Flores, a respiratory care practitioner.

“This win is for the people who were ignored for so long! This is a message that the establishment will no longer be tolerated! We have officially started the red wave!!”

I think Democrats in Washington (Biden/Congress) believe letting millions of people cross into the USA from Mexico, and live here illegally, will make those Hispanics who have "paid their dues", happy and grateful?


During the ceremony swearing-in Congresswoman Maya Flores, Speaker of the House Nancy Pelosi pushes one of Ms. Flores' daughters away, when she gets too close. (Nancy doesn't like Hispanic children...or adults)

I understand Nancy is stressed out because her drunkard husband is in jail right now, but she could at least pretend to like Hispanics for a minute.

posted on Jun, 27 2022 @ 09:25 AM
link
More than 1 Million Voters have (thus far) officially switched to the REPUBLICAN party, as the RED WAVE builds.

It's just the beginning. 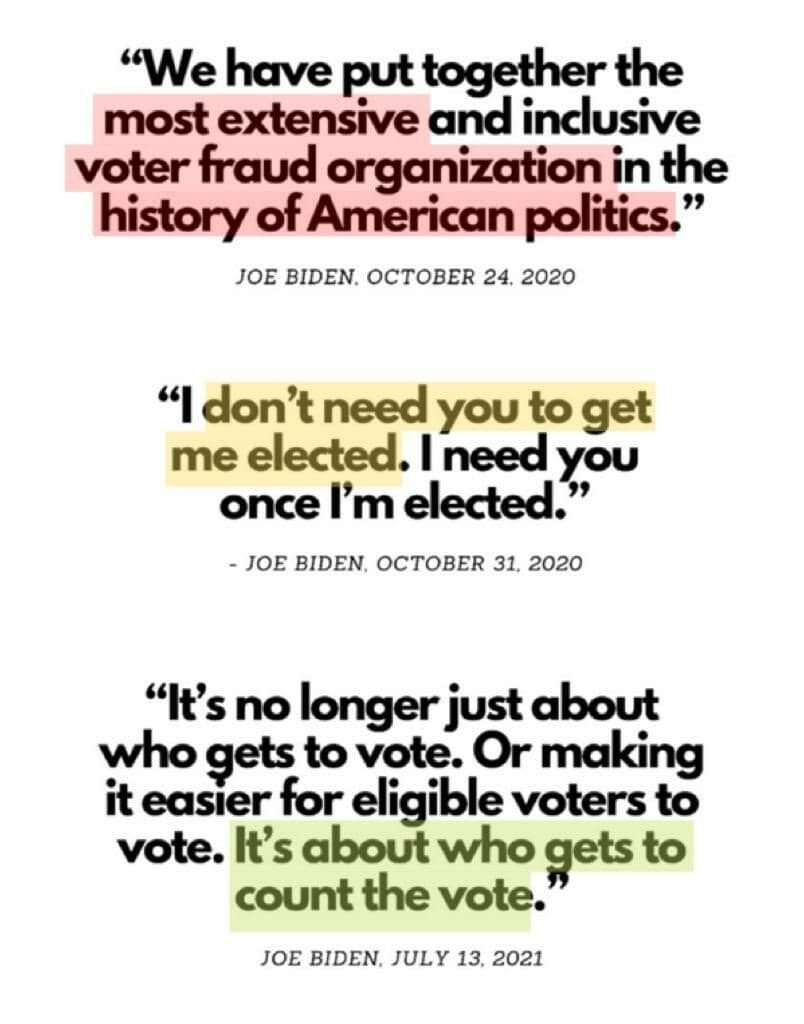 Here's a link to the ATS post containing the video of Biden telling a large (for him) audience of 200 people that he didn't need their vote, just their support after he's in the White House.

At the time, only President Trump and a couple of other pundits were sounding the alarm.

Biden couldn't fill a gymnasium but he was telling everyone he was going to win?

The guy standing on the street corner yelling about the end of the world was more believable.

Incredibly, (but not surprisingly) BIDEN and PELOSI are setting up the FEDERAL GOVERNMENT itself, to conduct the 2022 Mid-term cheating for Democrats!

How can that be stopped, short of running them out of office after the "steal" occurs?

Biden couldn't fill a gymnasium but he was telling everyone he was going to win?

Those are the people who voted.

Fan rallies are ... distractions. Trump fans follow him from state to state and so may not be voting in that state where they all show up.

We want the guy in the office, dealing with governing the nation and not running around with a cheering squad looking for crowd numbers to make him feel good about himself. And we don't want him off golfing, either.

Heck, Madonna draws bigger crowds than Trump, but I wouldn't vote for her over Biden because she doesn't know a thing about how government works.

And strikes back at Jill.. and CNN: gettr.com...

The madder liberals make her (and all conservatives), the better!