A date for barbara 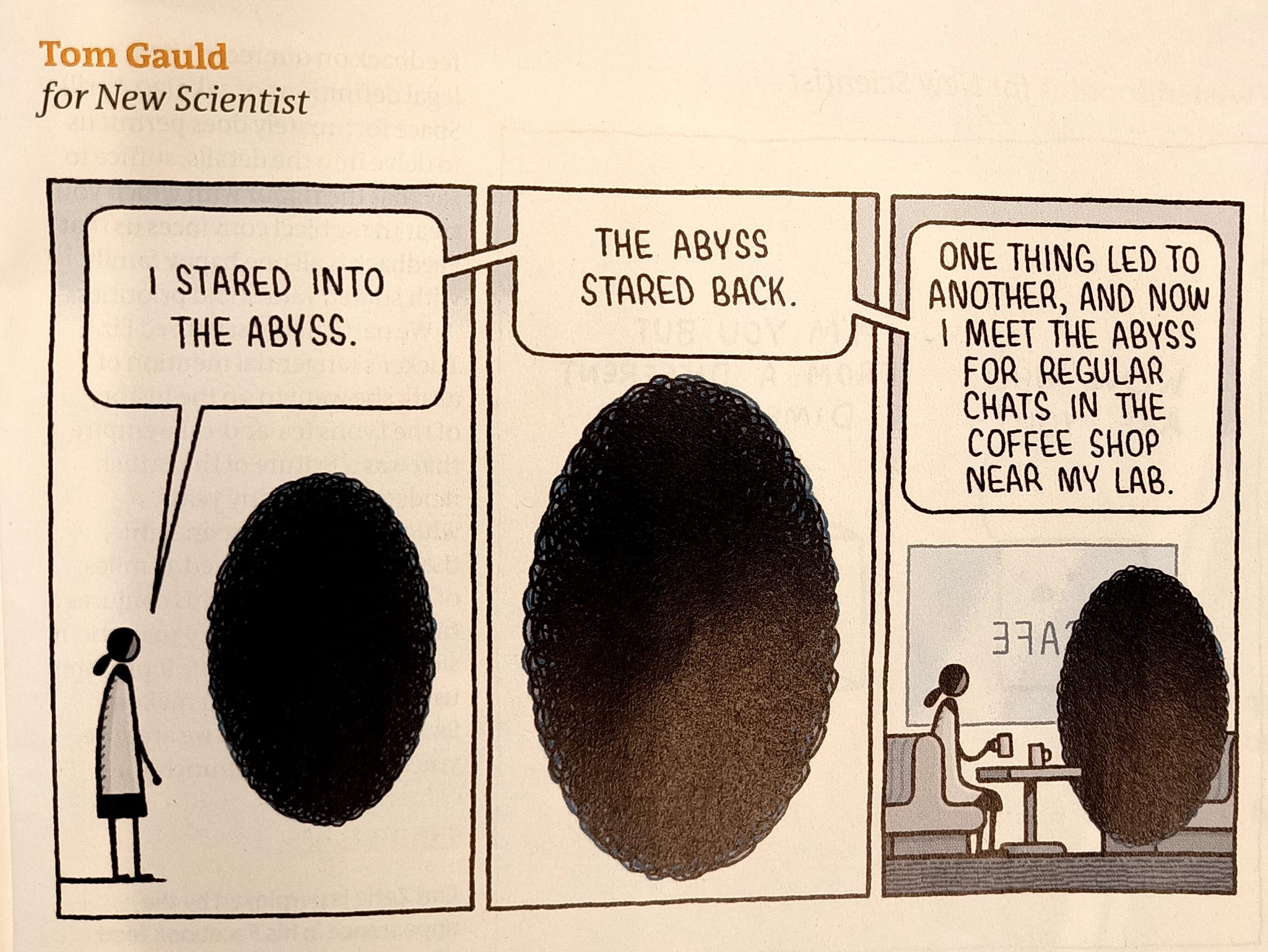 When the abyss blinked I was quite surprised and when it said no one else could see or feel it I carefully set my coffee down. It shifted and warped , folded in on its self and slowly became a man. He had sandy orange hair and was wearing a shirt and jeans that looked like something from a salvation army bargain bin but it suited him well and he smiled warmly.

I asked if he liked coffee as he seemed surprised at the cup in front of him and then nodded once carefully grasping the cup in front of him with both hands. I think so he said and put it back down and then looked into my eyes. His eyes seemed to swirl like cream for a brief moment; and then glow somehow. I found myself reflected in them and I knew that it was love. He said that his name was Sam Ellison and that he came here quite often and that made me dizzy. For a moment I felt vertigo although I recovered quickly as I already knew that. The small cafe was almost deserted this time of the night and the waitress was nowhere in sight at the moment; perhaps busily working in the kitchen area or in the bathroom. I seldom ordered any food here but realized that I had not eaten in three days and was famished so I decided to ask for a menu when she returned.
edit on 23-5-2022 by bluemooone2 because: (no reason given)
edit on 23-5-2022 by bluemooone2 because: (no reason given)

posted on May, 23 2022 @ 06:33 AM
link
We chatted about many things as the hours flew by and the clock behind us and to the left began to move forwards like something from movie. Sam stood up and said that he would go find the waitress if he could. He approached the counter area where she should have been by now and rang the small bell that sat there twice. It rang with a rather pleasant dull sound that sounded like it filled the entire cafe and then she entered from the kitchen holding two menus that she handed to both of us. We returned to our booth and decided that we would go with burgers and fries. We both nodded and asked for vanilla milkshakes also. The blond waitress smiled chewing gum lacidaisly and returned to the counter hanging the order on the silver wheel. It was the only one at the moment and I remember thinking that it looked rather lonely , and from the corner of my eye I watched her return to the kitchen area and begin to put burgers on the grill.

posted on May, 23 2022 @ 07:45 AM
link
As we ate I was lost in thought and wondering what we do now that we had met under such unusual conditions and how I would explain this to my roommate Diane when I returned to the small flat that we rented on the east side of town. The problem was that she would believe me almost instantly and without any thought whatsoever and also that she would want to tell everyone that she knew. Perhaps if she calmed down and listened to me I could make her understand that no one in there right mind would believe her. I decided to just take it slow and just take things one step at a time. Diane was sometimes dizzy but she was smart also. Very smart in fact. Perhaps she could even explain to me how this had even happened or if I was just going nuts and did not realize it. I glanced up at sam , and he was still there placing fries in alternating rows on a napkin . In between doing this he would take a large bite from his burger and chew slowly but his eyes remained fixed large white square.
edit on 23-5-2022 by bluemooone2 because: (no reason given)