January 6th - They knew it was wrong


Wait WHAT? Trumps communications were being blocked? That seems criminal to me! First Ive heard this. Please tell us more, or maybe a link?

you took the time to make a thread. Now, what about the information provided do you feel is bad and why?

I don't know if you actually watched the video, but the text messages in question were people who had no control, calling for control. It seems the argument is that Trump didn't act fast enough. I believe he was impeached for that as well. Most of the people who were around on Jan 6 admit it was a bad thing. It was 180 degrees away from the entire MAGA movement. 4 years of being the only group not demonizing police, 4 years of being angry the asshole left uses violence to get their way. 4 years of putting first responders on a pedestal as they deserve.

And in a few hours, every gift the left could ever wish for was granted. Groups of unindicted co-conspirators tried to entice the crowd to become violent. Hundreds of videos show this. Yet the people shown to be doing the violence aren't arrested. That seems odd. Almost as if there was FBI informants acting as agent provocateur's.

It was a failure of leadership from Trump. He never should have given the left what they wanted most. he didn't think it through.
edit on 14-12-2021 by network dude because: Beto, what a stupid name.

posted on Dec, 14 2021 @ 07:49 AM
link
a reply to: MDDoxs
What your group of friends call Jan. 6 is separate from the save America rally.
People attending the rally at least waited until the rally was concluded before making their way toward the Capitol, where your friends were already breaching it; before the rally was concluded.

originally posted by: Xcalibur254
a reply to: Ghostsdogood

So Cheney fabricated the texts?

Liz Cheney Orchestrated Secret Media Campaign To Counter Trump Rhetoric While He Was In Office: Report

The New Yorker noted that Eric Edelman, a friend of Cheney’s who served as a national security adviser to her father, former Vice President Dick Cheney, revealed the following tidbit to the publication:

Cheney’s rupture with the House Republican Conference has become all but final in recent days, but it has been months in the making. Edelman revealed that Cheney herself secretly orchestrated an unprecedented op-ed in the Washington Post by all ten living former Defense Secretaries, including her father, warning against Trump’s efforts to politicize the military. The congresswoman not only recruited her father but personally asked others, including Trump’s first Defense Secretary, Jim Mattis, to participate.

The story was seemingly confirmed by KION-TV anchor Aaron Groff, who wrote on Twitter: “Back on January 4th former Defense Secretary Leon Panetta told me it all ‘began with a staff person to former Vice President Cheney.'”.... 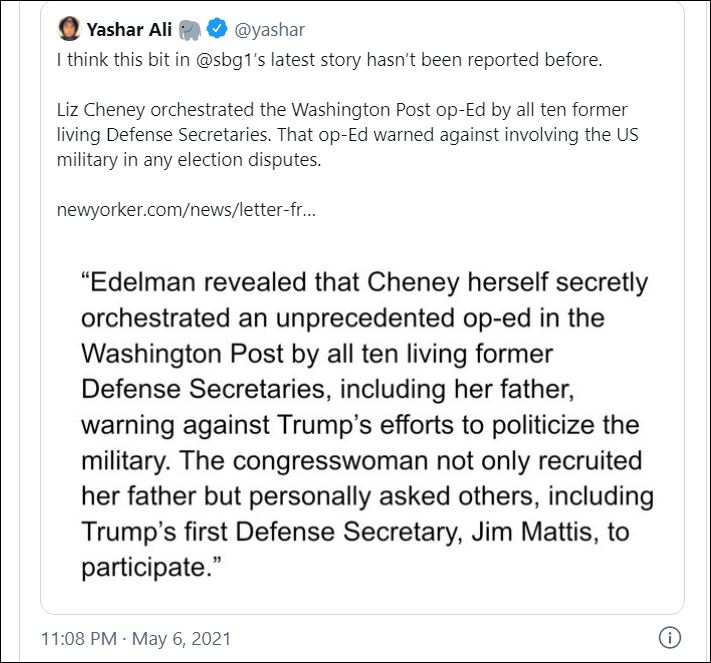 originally posted by: shooterbrody
a reply to: MDDoxs
Protesting is wrong now?
Oh wow. Who knew?


originally posted by: shooterbrody
a reply to: MDDoxs
Protesting is wrong now?
Oh wow. Who knew?


It appears some are encouraged, others are charged.
Interesting.
Who can protest, and whom can be protested.


Even calling it a "breach" is dishonest. They asked if they could go inside (politely, by most accounts) and were allowed in. It would be a fair question for the defense as to whether the guards were ordered to allow protestors inside, and if so, who gave those orders.

The texts don't show anything illegal or even inflammatory.

But the media has told you to be worked up about it and so you are.

January 6th - They knew it was wrong

posted on Dec, 14 2021 @ 08:39 AM
link
a reply to: MDDoxs
I have to give the Marxists and the traitors in our government kudos. They turned a day of the month into a national holiday to rally the "troops" around. January 6 was a damn fine psy-op and the majority of Americans have bought into it hook, line, and sinker. They used Trump as the fall guy, and they continue to use what happened as a psyop in the hope that a real insurrection will never happen if they can innoculate themselves by doling out enough guilt and shame to convince the American public how wrong it is to "water the tree of liberty with the blood of tyrants and patriots".

These elitist leaches may appear confident on TV, but they are shaking in their boots for fear the chickens will come home to roost sooner rather than later and they'll be staring their mortality in the face. Make no mistake. These critters are cowards.


originally posted by: shooterbrody
a reply to: MDDoxs
Protesting is wrong now?
Oh wow. Who knew?


Na, it didn’t have that cozy camp fire feel….


Even calling it a "breach" is dishonest. They asked if they could go inside (politely, by most accounts) and were allowed in. It would be a fair question for the defense as to whether the guards were ordered to allow protestors inside, and if so, who gave those orders.

It's not a secure government facility if the locks on the doors are not engaged.
Thanks for the correction.👍

posted on Dec, 14 2021 @ 09:04 AM
link
Federal election laws were broken. Forget about the fraud. Just the breaking of Federal election laws alone and then certifying the results without hearing court cases warranted an assault on Congress. They are all criminals working in that building.

That's ok though. Their day is coming. The history of the civilized world only allows corruption to rise to a certain level. It's unfortunate, tragic, depressing but have to let go. All flowers die. No point in trying to save it or worry about it. It will grow back in time. Maybe we are around to see it, maybe we are not but it will grow back.

posted on Dec, 14 2021 @ 09:14 AM
link
What precedent would she be doing that under? What’s wild is how you support the destruction of our great nation to appease your party loyalty.

At leas you understand who’s going to win already.

originally posted by: MiddleInsite
I hope no one here complains when Kamala Harris fails to certify the next election if a Republican wins.

Seems like that's the simplest way to keep Biden in power.

And you guys seem to approve of this.

So when Republicans CHEAT and choose different electors, Kamala will simply reject them.

Thanks for the road map to keeping power Republicans and Trump supporters, AND LIKE I SAID, no whining and crying.

When deciding the severity of a situation or problem I always listen to the person whose father was constantly being berated by the person whom they are accusing. Whose next Adam Schiff? Hilliary Clinton's already chimed in Trump must be stopped.

Hell, I don't think he even runs, if he does he probably isn't gonna win. He is too disruptive, divisive this country doesn't need that right now.

Did I like 1/6/21? no of course not, but to overdramatize doesn't help to get a clearer picture. 95% boomers and hillbillies 5% anarchists of no affiliation.

Hell, think of all the businessmen trying to actually persuade General Butler to make a move on Roosevelt? They all just went back to what they were doing.

Why? not because it was right perse' but it was the less destructive.

He got more minority votes than any Republican candidate in 60 years or something so no, he is unifying. He got 13 million more votes than Obama. He got the second most votes in US history behind the fraud winner.

The only people saying he is dividing the country is the media. Going off the actual vote data it says the exact opposite and it's crystal clear but the media refuses to say it out loud.

posted on Dec, 14 2021 @ 09:40 AM
link
Liz Cheney is on her way out the door and good riddance. Wyoming hates this woman with a passion. She’ll be one of the rinos that get the boot this coming midterm.