A Question if You are Bored

posted on Nov, 30 2021 @ 08:57 AM
link
So I love math. Sadly to say, I have probably forgotten more than I ever knew...leave that for the metaphysics forum. But I am starting to read and study it again.

So I am going to spell out a problem I don't know how to solve. If you are bored, please show how you would express it and solve it.

For the record, I feel music is my soul, and math/music make up a universal language that is the basis of our existence...again, not for this forum.

There is a 4 lane road, it stretches indefinitely. Two lanes run north, 2 south. Each lane is 8 feet wide. Walking North is a pedestrian. He is on the west side of the road. He is traveling at a speed of 4 miles per hour, and wants to cross the road. However, there are packs of cars traveling in either direction. Each car is traveling 35 mph. Each pack of cars consists of 7 cars. The first car is in the lane by the center line, the next is in the outer lane, the next by the center lane, etc. Each car is separated by the space of 1 car length, which we assume to be 8 feet. That pack of cars is separated by the back of the last car to the front of first car in the next pack by 47 seconds. The opposite lane has the same packs of cars separated by 45 seconds traveling in the opposite direction. Where the pedestrian is, the first car of the southbound cars is next to him. The first car of the northbound packs will pass the pedestrian as the 6th southbound car passes the pedestrian.

1. How long will it be before the pedestrian can safely cross the street?

2. How far will he walk until he can cross?

3. If he were to keep crossing back and forth, would a consistent pattern emerge?

That, or accidentally throw the bag of groceries down causing the cars to stop to allow him to repack grocery bag, then cross as they all blare their horns at him.
🙏❤

if the pedestrian pulls his glock and points it sideways at the cars, eventually, one will screech to a halt, and the driver will get out and run, leaving his car for the pedestrian. Carjacking 101 brought to you by GTA. You are welcome.

I hate to ask this, but it might make a difference....
What race is the pedestrian?


Are they self-driving cars or are there people behind the wheel and in control?

The cars are Travelling 51 feet a second with a gap of 2309 feet between the groups.
The person has to travel 32 feet total for all four lanes. the person travels 5.86 feet a second so roughly five to six seconds to cross the highway.
Given the large time gap, I would guess the that the person has plenty of time to wait for both lanes to clear before crossing.

I am so bad at math I get itchy even thinking about it! lol For example: your first two sentences caused me to see an image and have a question in my mind..."There is a 4 lane road, it stretches indefinitely. Two lanes run north, 2 south."...they have to meet at one point don't they? there would have to be an intersection right where one begins to go north and the other begins to go south, right?

and next: "However, there are packs of cars traveling in either direction."...
how is this possible when 4 only go south and the other 4 only go north?


you get the idea! I think my brain is scarier than yours when it comes to math. I keep getting stuck on "why?" when it comes to solving math problems. who said it is this way? who made that up? how do they know? etc....


*addition: I thought of one more thing...maybe he could just build a small bridge and go OVER the roads so he can cross any time he wants!
edit on 30-11-2021 by TruthJava because: added text

posted on Nov, 30 2021 @ 10:57 AM
link
I really like your post, but with all the crap going on in the world, I can’t expand my mathematical Limitations at this time.
But, I don’t think there would be a pattern developing because they are two different systems on the same infinite path.

posted on Nov, 30 2021 @ 10:57 AM
link
Any chickens?
Yes I know a stupid response but really, in my opinion, reflects the question
No matter how bored I get, never would I even consider attempting an answer, not maths minded, sadly
What goes on in my head is far more simpler, think my posts attest to that

And I am reminded that I am rusty with vectors...

Sorry, I can't figure it out. I can't even count to ten without getting confused... I think it's called dyscalculia. Even though I'm ok with numbers in mass, stats, graphs, etc... go figure!

Anyway, your problem reminded me of a meme... 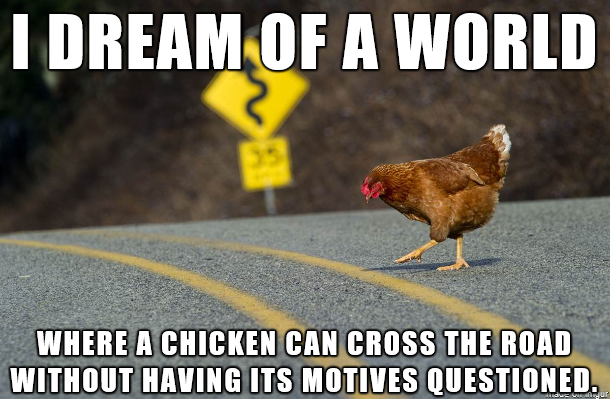 Sorry for the detour.

Easy-peasy : if he wants to go and get Encia22's chicken on the other side of the road : he must cross when there are no cars.
Unless he can jump.

Maybe he could build a bridge over the highway ?

Maybe there was already a bridge ?

Has anybody seen the bridge ?

Oh, this should be fun.

The trick is to get the units consistent. You have feet combined with miles per hour, and that simply will not do. To convert from miles per hour to feet per second, we need to multiply by 5280 (feet in a mile), then divide by 3600 (seconds in an hour). So we get the following (I am rounding to two digits):

Now we have everything in consistent units, let's look at the problem again:

(I'm not going to mention that these are extremely short cars spaced way, way, way too close for safety!)

Now, at some future time, we do know where the northbound cars are. That happens when the sixth southbound car is directly beside the pedestrian; the first northbound car is exactly beside the pedestrian as well. When does this happen? Well, between the first and sixth southbound cars (center to center) is 10 car lengths (five cars and five spaces), so that's 80 feet. So our second time point happens when the cars have traveled 80 feet, right?

So, to sum all this up:So the answer to number 1, at what point can the pedestrian safely cross, is beginning at 1.47 s.

Question 3: The answer is yes, there will be a pattern, and requires no actual calculation. The pedestrian's speed is cyclical; he walks, crosses, walks, crosses back, and repeats. The traffic is cyclical; the cars come in evenly spaced increments of identical length and speed. Therefore the result will be a cyclical pattern. The crossing back may be at a different relative time than the first crossing, as the traffic is mow moving in the opposite direction to the first crossing, but the timing will be identical for each direction of crossing.

I was right; that was fun!

According to my elementary level math, would it be possible to just wait until the fifth pass to go across easily?
The fifth wave of both side would occur at 235 seconds on both side. 7x5 because 47 and 45?

originally posted by: theatreboy
1. How long will it be before the pedestrian can safely cross the street?

2. How far will he walk until he can cross?

3. If he were to keep crossing back and forth, would a consistent pattern emerge?


Yup. This is what goes on in my head, scary?

1. 0 seconds. He can turn right away onto the lane. Until the 7th. southbound car passes, the traveler has not crossed the lane.

The each lane is 8 feet wide. The traveler walks 5.86feet per seconds.
For the two southbound lanes, he needs 2.73 seconds. It takes 2.28 seconds for the northbound pack to pass. So he is safe.

2. 0 feet. He can turn before his next foot reaches the ground. See above

3.
It takes him 5.46 seconds to cross the lanes. We add a second to turn around. 6.46 seconds to cross one side and turn.
6.46s passed from second zero.
Now, I do not have excel on this computer, I would give you the pattern and when it splashes the first time.

I still have tons of other parameters calculated, I love math too.

Here is the starting situation. I understood it that it's a country where the lanes follow western driving sides and that the spacing sentence was meant that each lane has 1 car distance, not spread over two. 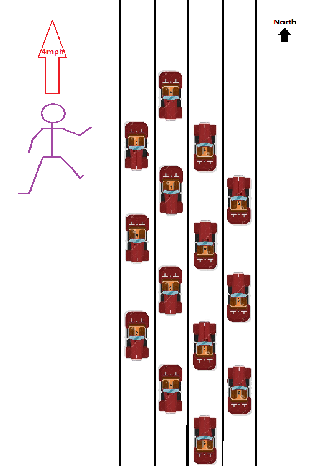 I am not bored but I need to keep it low, jabbed today.

Thank you. Makes total sense. I am looking forward to learning all this...again!

Oooh, bonus marks for the diagram (although it isn't quite accurate in terms of distance between cars and starting location of the NB pack).

By the way, you should know about google sheets! It's basically a free version of excel. You can program macros and everything.

originally posted by: theatreboy
So I love math.

For the record, I feel music is my soul, and math/music make up a universal language that is the basis of our existence...again, not for this forum.


I couldn't agree more with this.

posted on Nov, 30 2021 @ 04:21 PM
link
Cars are unsafe heavy metals driven mainly by idiots. There is no safe place for the pedestrian.
Even on the sidewalk aka pavement.

BTW a van driver failed to stop at a pedestrian crossing on red light today. I could have been a woman pushing a pram. The baby could now be dead. Almost I got his licence. later.
edit on 30-11-2021 by infiniteMeow because: add

originally posted by: Nothin
Has anybody seen the bridge ?


I ain't seen the bridge!