The Ancient Egyptian Stones Were Perfectly Precise How is this Possible? Many Qs Little Answers

What i found more fascinating was his last journey in Egypt on what he discovered further upon.


The discovery of Precise Lines? How is it even...
While we were in high school not a single teacher of history could answer or explain how was it possible for the Ancient Egyptian Stones to be in Perfectly in balance and in Precise.

The teachers failed to explain to their students how it were possible for a Razorblade or similar primitive tools to achieve heavy handed construction in that amount of 20 years it took to create such impossible precision?

Pyramids is 8 sided.
If anyone goes to Egypt where pyramids are whats more fascinating is that the pyramids are 8 sided asthmatically aligned again perfectly. How did simple slaves who moved heavy blocks, stones knew all this?

How did the slaves even know to make the whole area with Precise perfection? i have a hard time believing simple slaves had this kind level of expertise.

There are many Questions.

posted on Nov, 24 2021 @ 09:22 PM
link
I've always been interested in how they were built. Think of the logistics.
Cut the stones, transport them , assemble them and then feed an army of people on site. After thousands of years, they still fit so closely you can't fit a sheet of paper between them. Even with our modern technology, it would be a challenge.

How is wine made? Stepping on the grapes.

Those two went hand in hand.

Take Nile sand add Nile water add Nile grass and stomp stomp stomp add it to the form let it dry out pour down Nile water to stick them into place once already in place.

Start small keep stomping and adding like steps adding water from all four directions until it can no longer amount to anything...

A pole and a shadow and some vine at the center... to do the base and height. Pole removed gold cap stone placed using riches and a story on that side from all four kings where once complete all four kings and queens will spend a night in the chamber with the thought to absorb all the pain and suffering of the people equally across the land.

The sky cross is the sky pyramid(Southern cross,Goose,Kite etc.) depending on one's constellation tradition. The angle was supposed to launch the king or queen into new forms if they "passed away" before all the construction was completed at a special place to enter the new body from heaven.

The city people making it(all helped including pharaoh from beginning to end in equality) were afforded the same depending on rank, class and or status. Sometimes however they tried to outdo each other to increase rank and or status and such as those were outcast or shunned.

All of those that maintained the labor to completion were assured their place in heaven as a "star" or light to the world in the night sky.

originally posted by: Infinitis
a reply to: HawkEyi

originally posted by: Infinitis
a reply to: HawkEyi

To stack them up on the ground.

So, we're going to dig up rocks, and pile them up?

No, we're going to put them on barges and ship them several miles up the Nile. Then we're going to carry them five miles into a hot-ass desert and stack them up there.

Is it too late to join up with that Moses guy instead?

It's going to be great! It will have all kinds of mathematical stuff and align with stars and directions. Now, I'm not going to lie to you, it's going to be hard work. A lot of you will not live to see it finished. Your children will also die in this project. But it's really going to be nifty!

And why are we doing all of this?

Because I am Pharoh! My father had sex with his sister and produced a living god. Me. You will do as I say.

It was all the dust that made them asthmatically aligned...

The answer to this is actually really simple.

Much of the labor used to build the pyramids was farmers who couldn't farm for long periods of time due to the nile flooding. Meaning that Egypt had a large amount of people who had nothing better to do. So they simply took their time and did things very well.

If you take your time you can shave mm of of blocks rather than simply smacking them with a hammer.

posted on Nov, 25 2021 @ 06:57 AM
link
Seeing how the pyramids match up with the constellation and intensity of the stars in Orion it does look like a clue. With some of the distances in this constellation being a little off from what we see in Orion today, it looks like one way to get an accurate measure of when these structures where actually built. This is due to a little star drift over time.

If a species can conquer intergalactic travel, then doing some quality engineering is the kind of thing I expect. Maybe they could manipulate and bend gravity? Maybe they had some giants to move these blocks around like lego bricks? Maybe they done something else outside of our current comprehension?

There are still many mysteries and unexplored parts to these structures. Perhaps buried somewhere inside is a more detailed plan of just what when on?

With stones as hard as granite and only soft bronze tools to work them that would take a serious amount of time!

posted on Nov, 25 2021 @ 09:29 AM
link
a reply to: HawkEyi
Looking at the pic below, they don't look all that precise. You can also see where they used mortar to fill in some pretty big gaps. 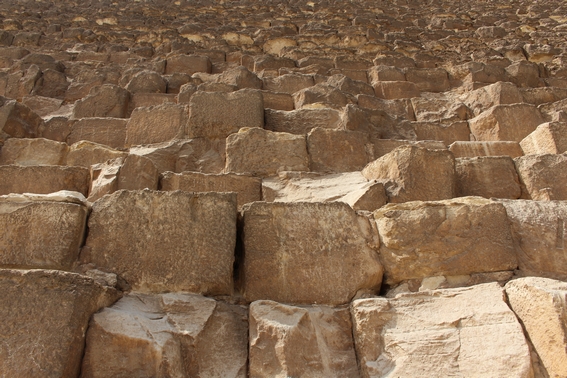 Good thing high school teachers aren't the experts. We have hieroglyphics and log books detailing the construction. One thing they had a lot of was sand, and it answers a lot of questions about the pyramids.

posted on Nov, 25 2021 @ 10:02 AM
link
Personally I think there is plenty of evidence that there was once an advanced civilization on earth long, long, long ago.

I think, humans, being humans destroyed themselves back to cave man days.

Humans inhearantly hate and distrust anyone not in their "identity group", it is built into our DNA, just look at the world today and you can see it all over the world and is actually being encouraged by many governments, through things like CRT, and Ughyur genocide, Christian genocide, rising anti-semitism, etc.

Our current world is set to destroy itself through nuclear war, all it takes is a crazy, like a radical islamist government, or an out of control world leader like N. Korea has.

OR a manufactured virus designed to reduce the population
could easily send the entire world back to cave man times as very few alive today know how to survive without electricity, grocery stores, or gas, or anything shipped to anyone.

OR a manufactured virus meant to target specific groups of people, like the eldery an infirm to reduce costs to socialist and communist governments - runs amok, makes an unexpected turn like being immune to all attempts to stop it, and ends up killing so many people that infrastructure crumbles to ashes. All it would take is a slip in the Chinese lab that has a history of selling dead infected animals to open air markets - or other biowarfare facilities around the world.

Because the Gods helped us.. Thats what our ancestors say.

Yep on that note I would back space war aka war in the heavens.
After so many years most today tech would be rusty dusty rubbish after cataclysmic event.

Things left intact or protected would probably suffer power overloads due to instructions not being deciphered properly. Language degradation and tribalism.
edit on 25-11-2021 by infiniteMeow because: add

Good thing high school teachers aren't the experts. We have hieroglyphics and log books detailing the construction. One thing they had a lot of was sand, and it answers a lot of questions about the pyramids.

The answer, according to a new study, has to do with wetting the sand in front of a contraption built to pull the heavy objects.


You mean they put those heavy objects onto those such boats? not even close.
edit on 25-11-2021 by HawkEyi because: (no reason given)

I am sure the slaves had such great knowledge to make sure that to place the pyramid into such a direction where it was facing the Orion constellation.


The teachers failed to explain to their students how it were possible for a Razorblade or similar primitive tools to achieve heavy handed construction in that amount of 20 years it took to create such impossible precision?


Sounded to me like you were talking about the finish of the stones since you didn't really mention the alignment of the pyramids with anything in the sky.

Also, it seems many here took it that way as well since that was what most of the other posts seem to touch upon.