Slovania Nurse tell what the codes on the vaccine vials are Saline Adenovirus & MRNA.

Head Nurse went in front of the cameras and took out the bottles of vaccines. She showed people the codes on the bottles, each labeled 1, 2 or 3, and then explained the meaning of the codes. Number 1 is placebo, saline. Number 2 is the classic RNA bottle. Number 3 is the RNA stick containing the onc gene, related to adenovirus, which contributes to the development of cancer. The number 3 says that people who get them will have soft tissue cancer within 2 years. She says that she personally witnessed the vaccinations of all politicians and tycoons, and they all received preparation # 1.

This guy shows you how there is a 1 in 200 chance of a severe adverse effect when yo get the shot.


I would imaging that if true there will not be any saline in the multiple booster shot.

What one did you get ?

posted on Nov, 24 2021 @ 06:20 PM
link
I must admit, the way some vaccinated people get a mild dose of covid later, while others get deathly ill has had me wondering if the vaccine supplies have a placebo mixed in.
Crazy thought, I know- but I do get some strange ideas trying to figure out what's REALLY going on, and why nothing seems to add up.

If that's the case they really suck at coming up with new tricks. Same situation happens 50% of the time when you buy a server or bartender a shot of clear liquor it's straight water lmao.

Boost revenues is more likely. They care about revenue not lilling us. Although cancer is awful profitable.

Well if there is a one in two hundred chance of a bad reaction with one shot, then the second shot, because you have played twice, gives you a one in a hundred chance, the third shot a one in fifty, the fourth a one in twenty-five. the fifth a one in twelve and a half, the sixth a one in six and a quarter the seventh a one in three and an eighth, and the eighth a one and a half-ish. Thats about right for the Georgia Guidestones.? I don't want to play that game.


So the Vaccines are REALLY New Age POISON . Who would of Thunk ? 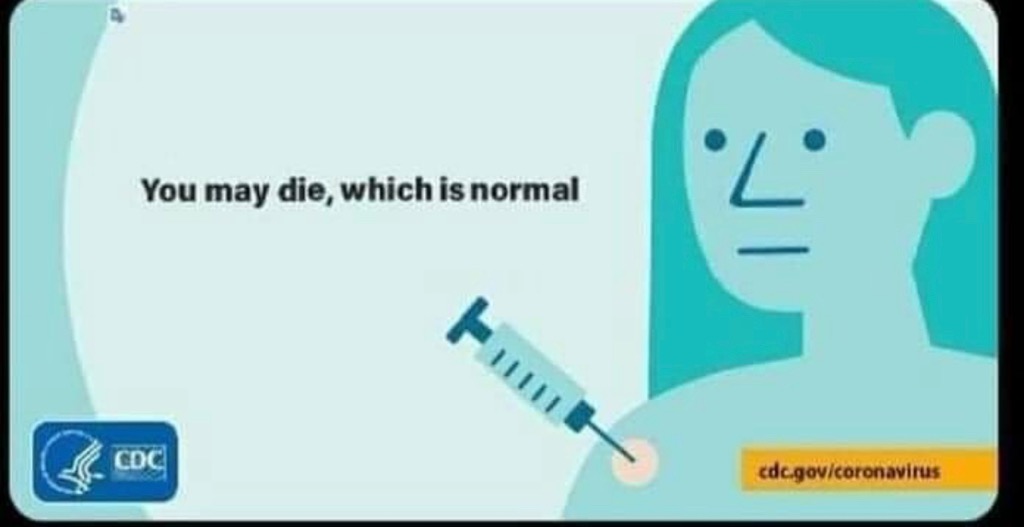 Well if there is a one in two hundred chance of a bad reaction with one shot, then the second shot, because you have played twice, gives you a one in a hundred chance, the third shot a one in fifty, the fourth a one in twenty-five. the fifth a one in twelve and a half, the sixth a one in six and a quarter the seventh a one in three and an eighth, and the eighth a one and a half-ish. Thats about right for the Georgia Guidestones.? I don't want to play that game.

First of all, the chance of a serious reaction due to the shot is not anywhere close to 1 in 200. Where did you get that idea?

"About 13 cases of rare blood clots are predicted to develop in women 49 and younger for every one million doses of Johnson & Johnson’s vaccine. Only two such clots for every million doses are calculated to happen in women 50 and older or in men 18- to 49-years old."

posted on Nov, 24 2021 @ 08:49 PM
link
Multiple mixes from multiple sources is hilarious.
So is this new abstract paper about heart damages caused by vaxxmaxers..

How are you supposed to know which one you were given? None of my information has those numbers in it.

You are posting poppycock, quoting numbers from the shills. Get your data from the real world and reconsider. You sound like Bill gates selling this snake oil.

I guessed many months ago that they were giving different doses out before they started saying that the vast majority of adverse reaction came from a limited number of lots. It was obvious - I thought - that everyone was not being given the same concoction. To many varied reactions.

This was necessary to gain some level of trust in those willing to be jabbed. The number or adverse reactions is high enough to catch the attention of anybody who's paying attention, but low enough to allow those who choose to be deceived to continue so without to many mental gymnastics.

And, yes, I suspect that as the boosters are rolled out there will be more and more harmful doses administered, more adverse reactions. By that time, the sheeple will be more convinced that it will all be the fault of the unclean (i.e., "unvaccinated").

Maybe a small handful of them will still blame the unvaccinated we shall see. As there are some countries that are already had pasted 90% vaccination.

Prove it. Anyone can say they are a Ph.D. in Virology and totally assure everybody that the Jab is safe. Then deny the hospitals are filling up with vaccine injured, the fourth estate is gone there are no checks or balances.

A lot of expired vaccines are being injected. (As original shots and as boosters. 83,000 found in New York.) That could also account for the increasing number of break-through cases. Very little random testing of antibody levels amongst the general population is conducted.

Medical people get $40 per shot from the government. They throw away lots of money by getting rid of expired vaccines.

There are no inspectors from HHS/CDC/FDA visiting doctors to check on the freshness of vaccines, like the government does with restaurants, food processing plants, etc..

Yes & what bloody leaders of any country would take a risky experimental jab if they could
end up with severe adverse reactions, disabled or dead? NONE!

I wish everyone would open their eyes to this big mind phuk...it really saddens me.
I send positive thoughts & prayers to ALL.

What do you need me to prove? There's not even a name provided for the nurse in the link. If it were a story everyone in Slovenia would know. More people on this forum know about this than people in the whole country and you need prove? There's not a single source for this in Slovenia and in slovenian but there are sources in English about the story that is happening in Slovenia and supposedly it is a scandal in Slovenia? Is common sense enough for you? How can I prove something that doesn't exist?
edit on 25-11-2021 by baburak because: (no reason given)

Ok then tell me what she is saying whilst reading the book. Just the first three paragraphs will do.This is from Coleman who isn't easily fooled twitter.com... World media told to bury this fast. ussanews.com...


and it seems to be up on Facebook .www.facebook.com...

Sorry I’m against the jab too, but you believe everything bad about it is true. Have you ever considered that bs would be spread deliberately about it to make those against the jab sound nuts? Because I’m sure that’s the case.

Oh it’s got 5g nanobot graphene in it that connects to the internet and downloads cancer when you step out of line...

There maybe saline solutions but the claims in the op would mean everyone administering the jabs would know what they were giving and be in on it. Which I don’t buy.

It’s probably not even about the jabs but the passports and coming social credits and total control.