Father/Daughter Take Up Arms For Defense 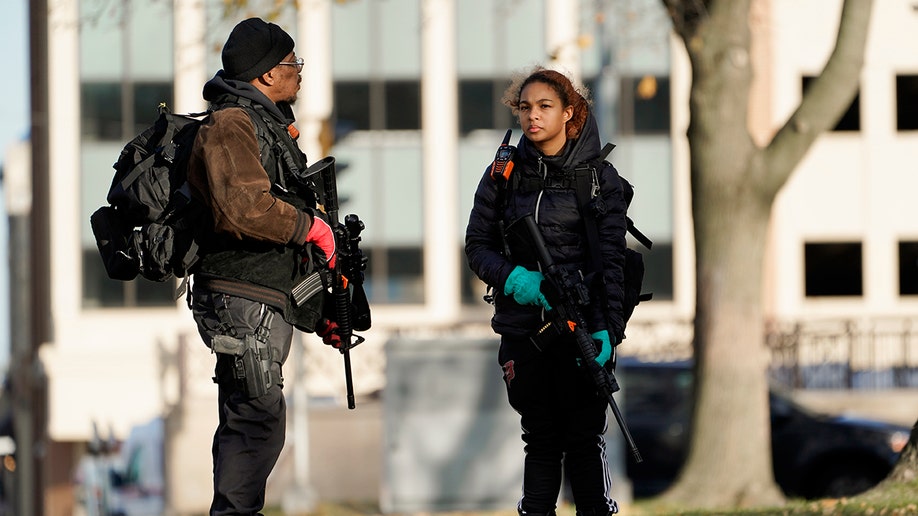 Erick Jordan and his Daughter Jade, 16 years old, are seen in the photo holding their AR-15 rifles.

Mr. Jordan and his Daughter were present to protect the folks that had gathered outside the Courthouse at Kenosha.

"This is my town, my people," Jordan said. "We don’t agree on a lot of things, but we fight, we argue, we agree to disagree and go home safe, alive."

I am wondering if the usual suspects will be here to admonish them for "carrying a weapon of war into a protest" or if they will relent and recognize that these folks aren't doing anything other than exercising their Constitutional rights. They certainly aren't provoking violence against themselves by their mere presence with the rifles.

Other than the obvious hypocrisy I am trying to point out, I do think this is a great way to spend time with your teenage Daughter. She will never forget being there with her Dad, period. I salute them, what they are doing, and this great display of the second amendment and common decency.

Personally wouldn't feel great about taking either of my girls into a powder keg, but I suspect it was as much if not more her idea than his. If she is anything like mine, they would have insisted on going. As much as you don't want to see them at risk, is it right to stop them when they want to do the right things? Uphold good values and decency? I will never be able to find it in myself to criticize standing up for others. Not everyone is physically or even economically able to defend themselves. Bravery isn't easy, and sometimes costs you very dearly. When doing the right thing isn't really doing the right thing....it highlights serious flaws in our society

I have pointed this out in another topic, but it too fits the definition of heroism

Heroism consists of putting others first, even at your own peril.

I don’t think you will get much of a reaction here but I will post this picture on some on my leftist group chats and report later…lol.

posted on Nov, 22 2021 @ 04:53 PM
link
This is just a great example of color means nothing when it comes to being a law abiding constitution following American. They are expressing their freedom and at the same time not hurting anyone. It is their right.

I agree though, even if armed i would not bring my child to one of these events.

I'd be willing to bet the 16 year old has more training under her belt or in her little finger than the so-called prosecutor of Rittenhouse did, pointing an AR at the jury...

No doubt about it!

First thing the Rittenhouse persecutor did after aiming the rifle at the jury was put his finger on the trigger. All this immediately after trying to emphasize the egregious nature of pointing a firearm at someone.....such hypocrisy from those guys

I appreciate your take NightFlight

Absolutely! I suspect they will find a tidal wave of support from the gun community 😊

I would be worried sick about my girls. Yet I can't think of anyone I would rather have by my side through anything. Of course I could never forgive myself if something were to happen to them

originally posted by: Bunch
a reply to: JBurns

I don’t think you will get much of a reaction here but I will post this picture on some on my leftist group chats and report later…lol.

I saw this photo on Imgur last night- didn't stop to read what it was.

They had it some 20 hours before you posted it here- so I'm sure they've already decided what it was about and spread the story they made up far and wide.
By tomorrow it'll be on MSM 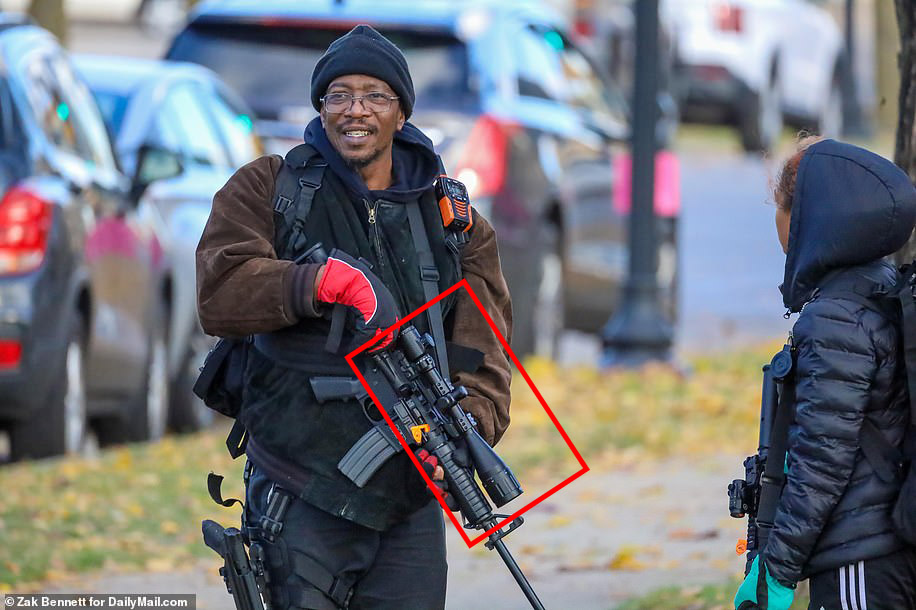 2. The daughter was quoted saying:


Rittenhouse has claimed he fired in self-defense, although, “I probably wouldn’t have fired my weapon,” Jade said..

Well, I am sure Kyle said the same thing. This is why you train for every situation. Nobody ever knows what you may face.
With all of that said....good for them for exercising their second amendment.
edit on 2021 by shaemac because: (no reason given)

Interesting! I believe that would be the same day it was supposedly taken on (Sunday, Nov. 21st)

Good to know we are still ahead of the MSM curve here...

originally posted by: shaemac
I have two things to say....

2. The daughter was quoted saying:


Rittenhouse has claimed he fired in self-defense, although, “I probably wouldn’t have fired my weapon,” Jade said..

Well, I am sure Kyle said the same thing. This is why you train for every situation. Nobody ever knows what you may face.
With all of that said....good for them for exercising their second amendment.

Then she'd have been a dead 16 year old.

Its a nice one! I am not much of a scope guy myself, most of my long guns either run iron sights, red dots, EO tech in one case and a knock-off ACOG on an M1A. But, I believe they make it easier to shoot with both eyes open and give you a better field of vision. It is hard to tell but it may not be variable magnification either, just a 1x I could be way off on that though. Something like he has could probably be useful at intermediate ranges.

The Daughter's looks like some sort of aimpoint clone, something like the Sig Romeo. I have a Romeo and like it a lot, paid 1/4 an Aimpoint. I think her optic is a lot more appropriate for the kinds of distances involved in SD use of force...should be described as point blank out to three feet for the most common

I also notice there appear to be orange barrel flags in place, which of course is their prerogative but where I live there is no obligation to show a weapon is not chambered or to have it unloaded in the first place. In many places, it is perfectly legal to openly carry a loaded long gun... but I am sure they had a good reason for it

Rittenhouse has claimed he fired in self-defense, although, “I probably wouldn’t have fired my weapon,” Jade said..

Heck I am sure each of us hopes they never have to use it. But it just doesn't seem fair for those criticizing him who were not in the same position he was and forced to make a life altering decision in less than a second. It is my most sincere hope nobody ever does put her in the situation to have to make that snap decision, but if she is I hope her judgement is as good as Kyle's was as far as the shoot/dont shoot. Watching the videos was almost like watching a training segment on shoot/dont shoot. But from everything I can see in the video, she knows a thing or two about the rifle she is carrying. Her trigger finger discipline is obvious and impressive

posted on Nov, 22 2021 @ 05:24 PM
link
We are being slowly programmed that the above picture is not normal, but looting and burning down businesses are normal behavioral patterns in a clown world.

No, its not the best thing to see this, but it puts that the real world can be a dangerous place at times.

I think is just a natural response. The absolute majority of people wouldn’t know how to react in a “kill or be killed” situation. That’s why self defense training is important.

So very true Its one of the main reasons I never carry without having some sort of OC device available. They used to make a nice model called the Spitfire. It worked really well for what it was, but I can not find them anymore for the life of me. So I ended up getting one of those Def Tec pocket clip kinds with a nice heavy stream

Having been sprayed on several occasions intentionally, it will take the fight out of someone in no time at all. I am a big fan of LTL deterrents for conceal or open carry. Just gives you more options. There is a compact model even made by Taser, the C2 or the Bolt I Think its called now. But its a solid choice, of course it is not guaranteed to work but neither is a firearm. Wouldn't want to be grabbing it by mistake vs. a knife or firearm, but under the circumstances of Kyle's first defensive gun use, a well placed shot from a Taser Bolt on a shirtless Rosenbaum could have drastically altered the outcome. Just drop the device and it gives you 30 second head start on escaping. The LEO models only give you 5 seconds of EMD where the C2/Bolt gives you the whole 30 seconds. Taser will even replace your device for free if you send them a copy of the police report. The Pulse is another great model, but its shaped like a small handgun so would require more time spent training to prevent accidentally drawing it vs. a firearm

As far as the legality of using LTL devices, the same use of force laws apply. In reality, except under circumstances of obvious misuse/malicious use, the use of a less lethal deterrent will not be heavily scrutinized. A better way to say it is that the bar for using it is much lower than a firearm. A firearm is not necessarily an appropriate threat to a single attacker of relatively equal size/stature, but LTL would be perfectly reasonable. As long as you can articulate a valid reason for using the LTL, you are generally going to be good to go. If you can use physical force to defend yourself, you are safe using LTL.

originally posted by: Bunch
a reply to: Archivalist

I think is just a natural response. The absolute majority of people wouldn’t know how to react in a “kill or be killed” situation. That’s why self defense training is important.

Kyle exercised incredible control and discipline at all times. He was never sloppy and never dangerous in how he handled his gun. I think the videos of him would be excellent in training for real world situations. IMO.


They certainly aren't provoking violence against themselves by their mere presence with the rifles.

The people that say crap like this, are basically using the same argument that a woman wouldnt have been raped if she didnt dress provocative......

People who think like this are a lost cause, they contradict themselves whatever the situation as long as it pushes the narrative.

originally posted by: Soloprotocol
What's in the oversized backpack?. An oversized Sammich?.