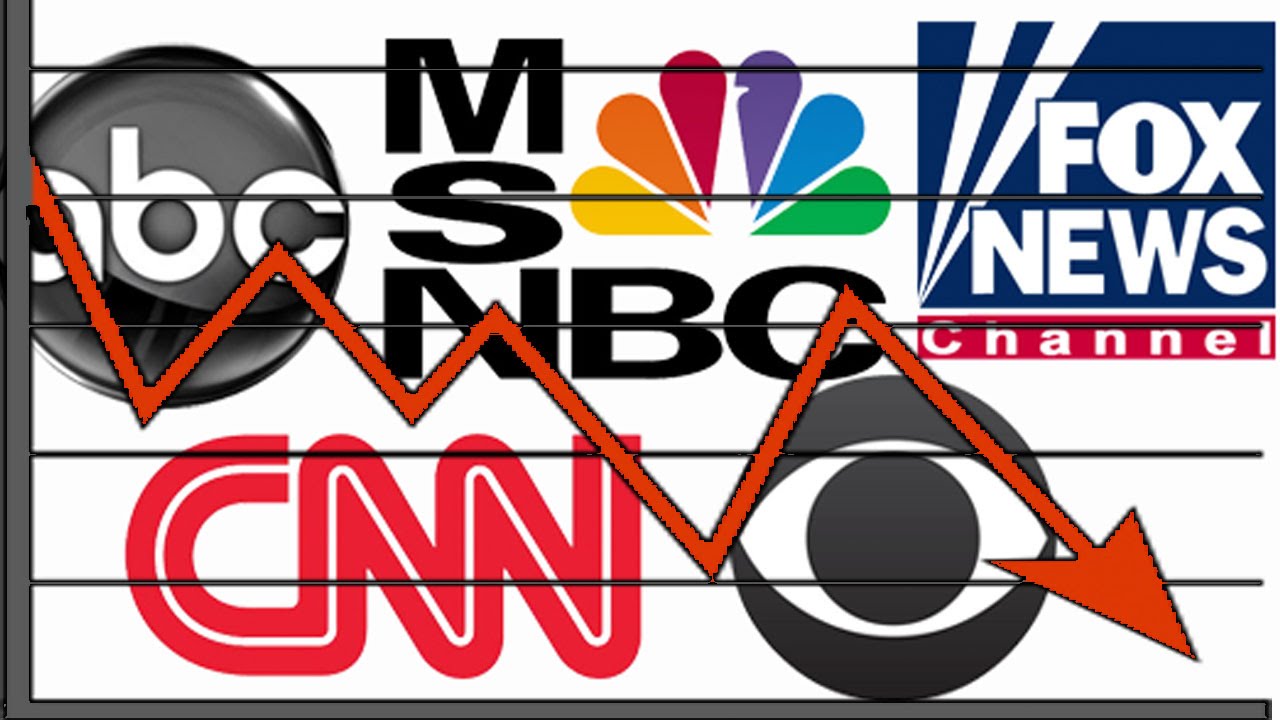 The U.S. media is the least trustworthy in the world, according to a comprehensive new Reuters Institute survey encompassing 46 countries.

Yes, you read that right. The country with among the most resources in this arena – human, technical and otherwise – finished dead last.

Finland ranked the highest, with a 65 percent trust rating. In Kenya, the trust rating clocked in at 61 percent.

But here in the U.S.A., the home of global media giants including the New York Times, Washington Post and CNN, we’re trusted by a whopping 29 percent of those reading and watching.

Is anyone really surprised? Because in looking at polls over the past few years we’ve been trending in this dubious direction for some time.

For example, one Axios/Survey Monkey poll in 2019 found that nearly 8-in-10 independent voters said they believed that news organizations report news “they know to be fake, false or purposely misleading.”


Also looks like legal safeguards once put in place to protect the public have now been systematically dismantled (or just blatantly removed) and along with the elimination of the 'Fairness Act' and the 'perverse move' of giving media corporations 'free speech' rights then would say Clinton's 1996 'Telecommunications Act' played a fundamental role as 'the rules of the airwaves were rewritten and all regulation thrown out'.


Passed in 1996 under President Bill Clinton, the Telecommunications Act has resulted in large-scale deregulation of the entire US media industry, removing many limitations on the number of different media outlets that can be owed by a single company.

Suppose everyone loves a mystery and according to this research noone really knows the true identity of the controlling shareholders of both 'big pharma' and 'big media' but they are one in the same.

Also thought there was some interesting factual info in the vid below describing how major media outlets share at least one board member with (at least) one pharmaceutical company - also brought up is the five billion dollar per year revenue stream between big media and big pharma and the staggering loss of public trust experienced by both.


The US Drug Companies Completely Own Our Mainstream Media

With the exception of CBS, every major media outlet in the United States shares at least one board member with at least one pharmaceutical company. To put that into perspective: These board members wake up, go to a meeting at Merck or Pfizer, then they have their driver take them over to a meeting with NBC to decide what kind of programming that network is going to air.


As if that's not unsettling enough it also turns out disseminating domestic propaganda is now legal; corporate news agencies can legally lie and 'big pharma' have been engaging in the production of fake 'VNR' news propaganda.


"Well, it’s like this. First of all, we’re talking about fake news. These are news stories done by journalists, but these are journalists who now work for public relations firms employed by the State Department, employed by pharmaceutical companies, and they’re producing news stories, video news releases, which are provided free to TV networks and TV stations, and are then aired by TV networks and news producers as if they were news, often as if they were produced locally by the station. And what this is, actually, is propaganda"

The MSM including FOX and NEWSMAX is the enemy of the people
edit on 12-11-2021 by sciencelol because: (no reason given)

posted on Nov, 12 2021 @ 10:23 AM
link
A good idea to reverse this trend would be to publish accurate information regarding current events.

US News Media doesn't even count as News. It's just endless opinion pieces from very wealthy, very stupid and ironically overeducated people who are laughably out of touch with nearly everyone on the planet except for their own group of worthless hack parasites.

But their fellow leeches on their twitter echo chamber tell them they're doing a brilliant job and everyone who disagrees with their braindead brand of consumerist corporate propaganda is obviously some evil-nazi-megademon. So they continue on. Leading to a spiral of them being ever more out of touch with actual people but receiving ever greater praise from their fellow corporate drones.

They'd have driven their businesses to bankruptcy with their incessant narcissism and smug superior attitude if America wasn't a corporate oligarchy ruled over by vertical monopolies that destroys any and all competition.

posted on Nov, 12 2021 @ 10:24 AM
link
Appreciate the replies and you won't get any disagreement from me there - an absolute disgrace how big pharma (and the.CIA) have been allowed to infiltrate journalism.

Posted it on another thread but thought this warning from Albert Einstein was a pretty relevant one. 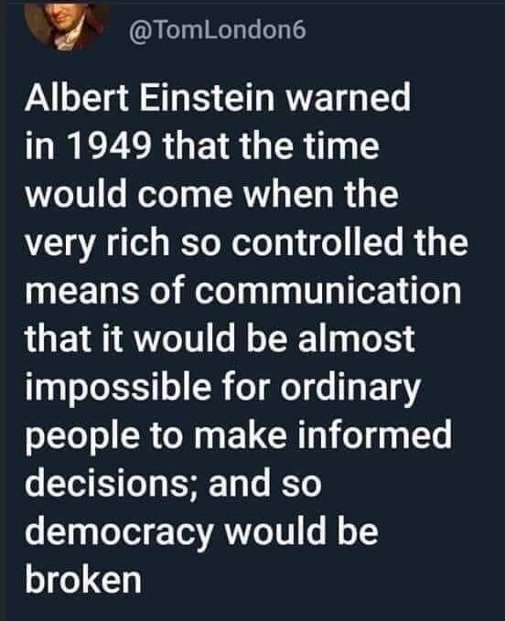 Yea people will eventually tune out, I will glance over the main web pages first thing in the morning otherwise I tune into local news only.

I'm assuming none of the big media outlets made any sort of official response to this poll?


Aren't they just owned by the same people?

I will glance over the main web pages first thing in the morning otherwise I tune into local news only.


Isn't the local news just owned by the same people?

I'm assuming none of the big media outlets made any sort of official response to this poll?


Probably not but let us know if you find anything.

Don't mean to sound cynical but regarding an 'official response' I don't think I'd believe a single word of what they had to say anyway.

Definitely looks like the psy-ops are now in full swing but any thoughts on the big pharma control aspect or the fact that disseminating domestic propaganda is now perfectly legal?

originally posted by: sciencelol
Because all they do is lie.

posted on Nov, 12 2021 @ 11:04 AM
link
The US media (and tech) companies appear to be mouthpieces for the elite. They represent the rich and powerful. No wonder people don't trust them, they don't report the news they try and create/shape it to fit their worldview.

It's obvious, based on how they continually bashed President Trump, 24/7, that U.S. media companies are Domestic Terrorists. This was clear as day to residents in other nations.

TRAITORS are hated by everyone. If "something bad" happened to any of them, there would be millions of Americans happy to see traitors get their punishment.


originally posted by: sciencelol
Because all they do is lie.

You got it half right IMO

Now just go somewhere to get away from them all

Its all propaganda designed to keep you in their bubble


Aren't they just owned by the same people?

I will glance over the main web pages first thing in the morning otherwise I tune into local news only.


Isn't the local news just owned by the same people?

Yeah they usually are, but if he's anything like me, the only thing he's paying attention to is LOCAL news, on local news, not national. State sure, national...just shove it.

Or he's muuuuch pickier and has a far narrower field of interest local news can whet the whistle of.
I basically just check the weather page & that's it anymore. If nothing on the main news page catches my eye locally, I don't bother. I don't need gossip stories, I don't need to know about some business' woke itch, other than I don't need to shop there, so thanks for the heads-up is about all they get, etc.

Apathetic news consumption is pretty nice, actually. The flow rate of the Bull# River is much less intense now.
edit on 11/12/2021 by Nyiah because: (no reason given)

But at this stage at least local news seems to be much more like the news used to be, that said I still dont blindly consume and while I am watching more news lately thats mainly due to being 4k miles away from my family so I want to keep an eye on things around them.

Yep, and what amazes me the most is people still watch it and believe it. This is after they are caught lying over and over again and now with the NY Times and FBI colluding together just shows how controlled they are. The world would be just so much better without ANY of these networks.

When I see this, I just think 45% of Canadians and 29% of Americans are pure unadulterated idiots. That's all I see now, variable levels of stupidity. People willing to believe the bought and paid for MSM by a group of politicians loosely called government. They are just legalized RICO and organized crime operating under the "color" of law they make up as they go along to protect themselves and extort the rest of us.

It's long past the time to remove them.

Don't mean to sound cynical but regarding an 'official response' I don't think I'd believe a single word of what they had to say anyway.

Oh I agree. That was my first thought, I was wondering what kind of bullsnip they might have come up with to dispute the poll, and/or who they claimed was responsible for faking it.

When I see this, I just think 45% of Canadians and 29% of Americans are pure unadulterated idiots. That's all I see now, variable levels of stupidity. People willing to believe the bought and paid for MSM by a group of politicians loosely called government.


That could be a somewhat positive way of looking at this...
At least it's only 29% of Americans that believe the nonsense they spew.

fox and newsmax is where i go to get away from CNN, MSNBC , NYT's , Wapo..

If they are the enemy ... Count me as an enemy then.

Think that kind of divisive reaction is precisely what they're so intent on promoting - also suppose there's a very good reason why all roads lead to precisely the same place when one 'follows the money'.

"The political machine triumphs because it is a united minority acting against a divided majority."

There's an older doc below but thought it contained some really relevant info about 'the corporate implementation of ideological warfare'.

'Orwell Rolls In His Grave'

"Could a media system, controlled by a few global corporations with the ability to overwhelm all competing voices, be able to turn lies into truth?