Kyle Rittenhouse Is A Hero - and apparently his judge sees it

Which is dumb and sad and shouldn't be there. The kid suffers from PTSD, and feels bad already, just leave him alone.

No wonder he suffers from PTSD after those antics, but that would be somewhat self-inflicted.

I would not touch the little fellow with yours liliththedestroyer.

Court verdict had been given.

I can accept the result, and so should everyone else, as that's how law functions.

Hey at least those morons in the Arberry case are going away. Most likely. I watched the younger individual on the stand, admitted he shot him without being under threat.

The defense has tried to show Arberry was up to no good at the time, but at worst he was trespassing

Although many conflate this with the KR case, they are majorly different

of course he has PTSD


he was in a life or death situation almost lost his life to the mob or to the legal system and he had to kill and injur a loser.

I suffer from PTSD myself penroc3, and your correct, he will be dealing with that night for the rest of his life.

That's because what we do in life, and what we experience, makes us who we are.

Some experiences don't wash off or go away so easily.


not watching peoples hands, or looking at back packs left unattended, loud noises, and the memory flashes.


i would be driving and break out into a cold sweat because thing would just pop in.


or the smell of blood....i was a medic and i saw a lot of people at night time and their blood would look black and would be thick and slick then turn sticky and smell like penny's/metallic

the hardest thing i deal with is the guilt of not being able to do more and what my doctor calls survivors guilt.

i was attached to multi service groups and i saw some things that would give saw a run for its money. people halfway out of destroyed buildings where it was clear they were going to die and some of them i had to just load up with ketamine and stick a few fentanyl suckers in their mouths, i saw other medics kill people with opiates so they wouldnt have to suffer and not slow down the team.

i even saw what i would would be borderline war crimes.


Afghan troops when they weren't high on hash they were medieval with how they treated captured fighters, i saw someone get killed like the guy in saving private Ryan when the American gets a knife to the chest i have seen people hit with rocks and hand to hand fighting.

Glad you managed to have come out the other side.

Seems to me humanities capable of horrendous evil acts of depravity and also great compassion and empathy.

Bit of a riddle, wrapped in a mystery, inside an enigma really.

I totally agree. As a mostly conservative libertarian, I'm one of those types that simply want to be left alone. I only tend to fight back or get angry when I'm pushed into a corner. I think most conservatives fall into that category and why we have a general disdain for progressives who are the ones doing the pushing.

I also would like to point out that I don't necessarily support Kyle going there in the first place. The first thing I was taught was to avoid crowds...especially ones that are politically motivated. I certainly respect his bravery and integrity for doing so but it wasn't wise.

IMO, Kyle made a poor decision and it almost cost him his life in several different ways. He's now going to spend the rest of his life looking over his shoulder. As for his PTSD, he's going to suffer from it all his life just as I and millions of others have...it gets better but it never goes away. No matter how rich he is going to be, I still pity him.

everyone there that night was there to cause trouble.


that being said he put himself in harms way, but he did it under the guise of a young mans idealism and the false idea one man can make a difference in the world.

The crazy child molester went after Kyle with every intent to harm or kill him as did the other 2, only one of them made it.

and you have to remember this all happened in .78 seconds for all 3 men. Kyle was in a panic, any shooter knows that that fast shooting is uncontrolled fear pulling the trigger not a rational human.

We all have the benefit of hindsight in this case but in reality Kyle had less than a second to decide if he wanted to live or if he was going to let a mon beat him to death or the grandma beater shoot him in the head.

it is so clear that none of them had seen real fighting because anyone that has stays FAR FAR away.

if its not your home, family, self you really have no business at 17 with a powerful rifle going to a riot, just like the other side had no business having guns at what they called a peaceful protest.


This ruling is only going to embolden people to take the law into their own hands and talk to lawyers so they know the line and how they can escape murder charges.


if these people want to walk around with guns and help people they should join the national guard or the military or become a police officer.

There was no good outcome in this case other than the fact a 17 year old child will not spend the rest of his life in a box all alone in protective custody.

And for the other side they will for SURE be thinking twice about going to a 'protest' and acting like they are invincible.

Brother, I too saw the same horror in Iraq. Bodies covered with dried-up tar-like blood in the hot sun, thousands of flies covering them, the silence filled with the crying of civilians who are suffering....something I will never forget. You never get over something like this, you simply learn to live with it or you don't.

Heroism consists of putting others first, even at your own peril. The noun heroism comes from the Greek hērōs, which referred to a demigod. As someone who shows great courage and valor is referred to as a hero, their actions are considered to be acts of heroism.

This is exactly what KR did. He put the lives of complete strangers ahead of his own. Despite the danger, he went to help, which is far more than 99.9999999% can say. About this or any issue. Whether its the border or a riot or being there after a disaster. Knowing full well what the legal system would (try to) do to him he faced that danger head on and because of that I believe the label "heroism" is fitting.

He may not be MLK or JFK, but still a hero in his own right. I would agree that you can add foolhardy to that list as well, idealistic even, perhaps. But when the government said it wasn't coming (and did not come) to help, when the main stream media spread lies regarding the nature of violence directed at people in Kenosha, when the government we fund turned their backs on individual Citizens very few people showed up to help. And that frightens me a bit. Where the knuckles met the pavement only one person took a stand and that was Kyle Rittenhouse.

So while I would not recommend other 17 year olds necessarily following his footsteps, there are a heck of a lot worse things you could be doing besides scrubbing graffiti and defending businesses from arsonists.

I see we agree on about 99% of this, and I certainly do appreciate your take & reply
edit on 11/21/2021 by JBurns because: *Mean to reply to penroc3 but I must have deleted the reply part. Apologies


he is being used as a tool and thinks its all fun and games right now but he still took two mens lives. I can promise you that even if it is self defense he will never forget their faces.

KR battles will be alone in his bed room at 3AM clutching a gun thinking some crazy ANTIFA is going to kill him and his family.

he dished out righteousness in every single shot, and in reality he should have finished that slime Gauge off with a nice gauge to the forehead....but that's too far..

Agreed. No matter what he will have to deal with the PTSD and trauma of taking a life. I think you could get over shooting someone that eventually did survive, but it would be chilling to think back to the moment you had to hard punctuate (.) someone’s life

He’ll discuss his trial, his life, and what happened the night he shot three men in self-defense, killing two of them. Ashleigh, on her show “Banfield,” will come with her questions but will also ask questions from NewsNation viewers.

Also, unlike any interview of Rittenhouse so far, Banfield will air the entire interview unedited and uninterrupted.


Better to be Judged by 12 than Carried by 6 . Self Preservation is a God Given Right .

Although I do not wish that weight on any body. Went my entire career without even coming close to OIS. Hope to do my retirement the same ☺️

Of course there are many folks living in far more dangerous areas and under more unstable circumstances than I am. I am very happy each of us has inherent rights to exercise what is a fundamental and natural right. An instinct, even. But establishing the legal framework ensures the life you preserve through force won’t then be taken from you by the state

(You does not equal you, just a hypothetical person) 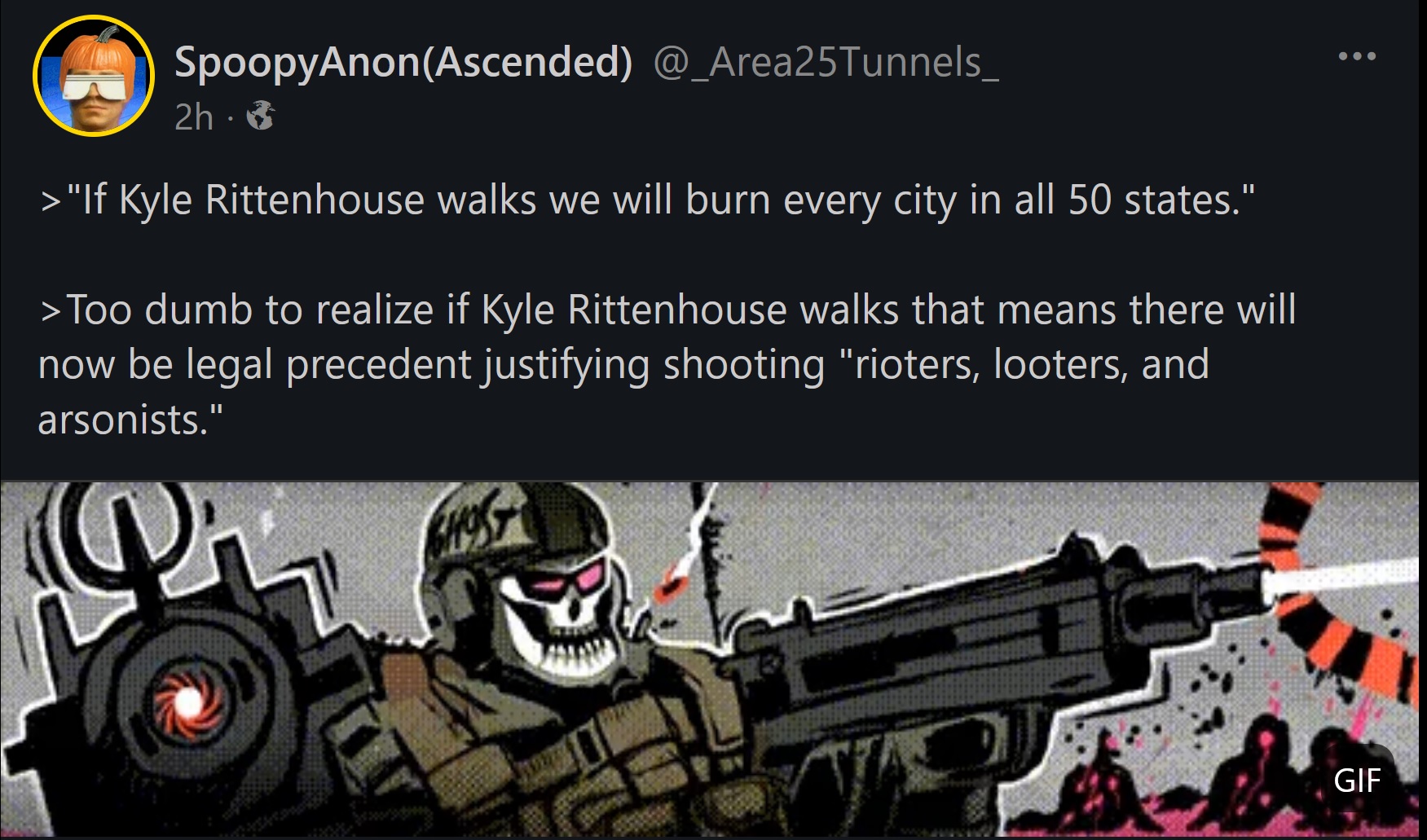 did you actually watch the trial or ar you parroting what CNN says. Spoiler alert Kyle had multiple people say and try to kill him. He had a male convicted , male child molester point a gun at his head so he shot him. Same sort of scenario for the other two. It's really not about Kyle it's about can the liberal mod Burn Loot and Murder ( BLM ) with impunity. The answer is no. IMO he should not have stopped at just 3. If he shot 20 more the odds are he probably would have rid this Great country of at least 2 or 3 more child molesters.

Hope they burn down DC , the city needs cleansing

actually I remeber DC burning the first time. I lived in Md I could see the smoke from my house about 8 miles away. In the 80's i worked with 2 black men that use to fondly reminisce about working at the Kodak warehouse. One was a delivery driver the other worked with me in the warehouse. One day out of the blue the one i worked with told me how nice it was working and living in DC was before the riots. They were both treated very nice by Kodak , family medical plans, paid vaccation. They both could walk to work. There were plenty of warehouses/stores/businesses in DC anyone that wanted a job could have one. That all chainged after the riots.