"People who haven’t consented to this government and it’s schemes outnumber any rigid side of the political divide."

originally posted by: burdman30ott6
...eliminate the welfare state as far as I am concerned. That solves that problem.


originally posted by: dandandat2
When it comes to accepting hypocrisy; ill go with the spending whores who like to pretend they are not.

Why settle for hypocrisy and the status quo?

There are few other choices. I'm not uncomfortable enough to star a revelation and those that are also don't have an agenda I agree with.

originally posted by: dandandat2
There are few other choices.

For me (R) and (D) are not a choice and never will be until we get some sort of lobbyist/special interest reform.

Republicans have taken after Trump and being very creative in their negative descriptions of liberals . Dems though for the most part seem to try hard to play nice. For me, this is why I like a couple of late night talk hosts that pull no punches in calling out the conservative rhetoric. 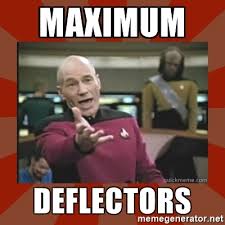 They're not called 'deflectors'. In TOS, 'deflector shields' may have been mentioned, but usually, they're simply called 'shields', as in 'shields up'!

There are also no 'maximum' or 'minimum' shields (let alone 'deflectors'), but of course the they have adjustable settings, like what they are at. For example, 'shields at maximum' is something you might hear sometimes, but often, it's simply 'shields up' or 'red alert, shields up', etc.

This picture makes no sense.

posted on Sep, 30 2021 @ 11:40 AM
link
Everything currently taking place on Capitol Hill is targeting the lower/middle class.
Everything.
3.5 to 5.5 Trillion Dollar "Human" Infrastructure Bill will be the straw that breaks it's back.
"Tax the Rich!"
They will not tax the rich.
If they really wanted to make a difference, instead of giving the IRS 80 BILLION dollars for 83,000 more agents, to go after $600 transactions, they would rewrite the tax code.
Close loopholes.
Get the lobbyist out of congress.
Get congress back in the habit of writing bills, reading bills and then voting on said bills instead of lobbyist writing bills, congress not reading bills and then voting on said bills.
"The American Families Plan" is anything but ...
It is a Globalist plan to finish America off.

...eliminate the welfare state as far as I am concerned. That solves that problem.

I will be looking out for that coin hitting my pocket soon.

(My silliness aside on the subject, I now return you to the normal conversation)

Yes but how many U18s are there

This will no doubt also be entertained by Biden and the loony Left.

Mitch McConnell had no problem with it then.

But the typical Republican hypocrite now doesn't want America to pay it's bills, even though these bills were run up during the Trump administration.

Again, typical Republican, cries fiscal responsibility, but when in power, spends like a drunken sailor. Eats the dinner, but then is a deadbeat who doesn't want to pay the bill.

That's all I see here.


That's really lame. Both political parties are out of control, and the what-about-ism and finger pointing does nothing but create more division.
The root of the problem is the corrupt career politicians. They become millionaires in roughly 10 years of reaching congress, the house or senate.
The only thing that could ever stop the 1% from destroying this country through their greed is a convention of states to force term limits, but that will never happen as long as they can keep the short-sighted serfs fighting amongst themselves.
While you all are hating each other because you have different opinions, the 1% are still making bank. It doesn't matter to them what we fight over, as long as we keep fighting.
When we simmer down, they get scared that our attention might just shift to them and the destruction they're causing, so they fire up a new crisis for the MSM to get people to focus on.
Before you can figure out how you're being played, they throw a new sensational crisis at you to focus on. And it works1
Republicans and democrats need to realize that all politicians are bedfellows. They have it all, no matter which party is in control. Money, power, greed. They are the elite, we are the means for their wealth, and they don't need the majority of us maintain their positions.
The power of America shifted from the people to the politicians many, many, many decades ago, and as long as people are divided there is no way we , the people, will ever reclaim it.

posted on Oct, 2 2021 @ 05:13 PM
link
Of course, they know our currency is going to collapse anyhow. The debt is untenable. The inflation is absolutely disgusting.

You all have invested in BitCoin and precious metal right? Only currency "they" can't touch.

Most of these people/corps aren't worth saving, and we're grossly overpopulated so the solution is quite simple. Don't have to raise a hand against them, but certainly don't throw them a life preserver. Just sit back and mind our own business is my answer.

And when the default happens, all the chumps who put everything into USD will probably starve or freeze to death, assuming the vile raiders don't get them first. Those of us with crypto and metal and enough supplies to outlast them won't break a sweat.
edit on 10/2/2021 by JBurns because: (no reason given)

posted on Oct, 4 2021 @ 01:19 PM
link
I'm sure there is something on some old piece of paper giving us the right to do something about it. If only I could remember what it is. a reply to: JinMI


Im thinkin, if you've got a trillion dollar coin, you can buy an entire fleet of Terex Titans, and have enough left over to buy most of the middle east and live on comfortably for the rest of your great great grandchildrens lives.
edit on 10-10-2021 by alphabetaone because: (no reason given)


Im thinkin, if you've got a trillion dollar coin, you can buy an entire fleet of Terex Titans, and have enough left over to buy most of the middle east and live on comfortably for the rest of your great great grandchildrens lives.

Or hold onto it until the mid 2020s when it will buy you a loaf of bread and a half gallon of synthetic milk with your Biden Grocery Ration Voucher.

posted on Oct, 10 2021 @ 08:57 PM
link
No more boomerang, no more spear.
Now all civilized color bar and beer.
No more sharing what the hunter brings.
Now you work for money, and pay it back for things.
www.poetrylibrary.edu.au...
edit on 10-10-2021 by halfoldman because: (no reason given)