What if Eintein & Hawking Had been Murdered in the Womb Because of Their Illnesses?

originally posted by: ElectricUniverse
a reply to: smurfy

Yeah smurfy, laugh like an idiot about something you are ignorant about...

Let's have a lesson then! What's the difference between Autism and Fragile-X..at least concurrently?
edit on 11-9-2021 by smurfy because: Text.


Are you saying the mother can continue doing drugs, being a drunk and still breast feed their child afte rthey were born

SCOTUS decided that having an abortion was a women fundamental right, that’s the law.

You want the government to be able to tell women they don’t have that fundamental right.

I’m here telling you don’t come back here complaining when government come knocking to your door to give you the jab because according to you government should be able to determine what we do to our bodies.


Yes Phage, there are laws against mothers that are breastfeeding their children being drunks and doing drugs

You are giving me talking points and I’m giving facts of law.

SCOTUS decided that having an abortion was a women fundamental right, that’s the law.


The SCOTUS are not supposed to make new laws. They are supposed to interpret the law. The law of the land is the U.S. Constitution and the documents that made this country like the Declaration of Independence. Nowhere in these documents does it say abortion is a right. They do say that LIFE is a right of every human being...

Not to mention that "again" the SCOTUS and judges in the past argued in favor of slavery... Are you claiming they were right in the claims that slaves were property and not human beings?...

originally posted by: Bunch
You want the government to be able to tell women they don’t have that fundamental right.

Show me where in the U.S. Constitution does it say abortion is a right...

originally posted by: Bunch
I’m here telling you don’t come back here complaining when government come knocking to your door to give you the jab because according to you government should be able to determine what we do to our bodies.

And now you are trying to claim oranges and apples are the same... First your argument has to be right and you have to prove that a human fetus is the body of a woman, but since they ALL have different dna from the mother's and have their own organs there goes your argument...

-or a social experiment about who notices spelling errors?

I'm cornfused
edit on 9 by Mandroid7 because: Added

I don’t have to prove you anything. It’s been decided by the SCOTUS. But then again conservatives are the party of “law and order” only when it suites them.


...
Drug Abuse Laws in conjunction with Child Abuse:
Currently 25 states—as well as the U.S. Virgin Islands—possess specific statutes, which address drug abuse and the exposure of children to illegal drug activity. Exposing a child to the possession, manufacturing or distribution of illegal substance is considered child endangerment in seven states in the US. The exposure of a child to drug abuse or drug paraphernalia is considered a crime in North Dakota, Utah and the Virgin Islands.
...

Even in those states where there is no specific laws, if there is evidence of substance abuse of a breastfeeding mother to her child, child protection services get involved and have taken the children from those families...

originally posted by: Bunch
a reply to: ElectricUniverse

I don’t have to prove you anything. It’s been decided by the SCOTUS. But then again conservatives are the party of “law and order” only when it suites them.


Of course you don't because you have no real counter argument to speak of.

BTW, in nazi Germany there were many laws made that led to the murder of millions of people, including children... i guess your argument is that no matter what the law says it must be followed, even if it is a criminal law...

What's more. We have learned a lot more since "Roe vs Wade" about the human fetus. Not to mention the fact that Roe vs Wade stated that in the third trimester the state can decide to save the life of the child... But your side argues that "it is the right of women to murder their unborn children until the very same day they are to be born..."

Even in those states where there is no specific laws, if there is evidence of substance abuse of a breastfeeding mother to her child, child protection services get involved and have taken the children from those families

Does she have to be breastfeeding for that to take place?

But to get back to the point. SCOTUS says that, until a fetus is viable outside the uterus, it is a part of the mother.

originally posted by: Phage
...
But to get back to the point. SCOTUS says that, until a fetus is viable outside the uterus, it is a part of the mother.


Show me where did the SCOTUS stated that a fetus is part of a woman's body. Don't give me websites making the claim. Show me the proceeding/statement in Roe vs Wade where they stated this.

What's more...Are the SCOTUS doctors of medicine to make such claim?...

A person may choose to have an abortion until a fetus becomes viable, based on the right to privacy contained in the Due Process Clause of the Fourteenth Amendment. Viability means the ability to live outside the womb, which usually happens between 24 and 28 weeks after conception.

posted on Sep, 11 2021 @ 09:14 PM
link
a reply to: ElectricUniverse
Nah nah nah… don’t spin this on me… you are the one that is proposing the government can tell people what to do with their bodies.

The NAZI government… key word GOVERNMENT!! Enacted laws that cause the murder of millions of people. You are the one here telling us that GOVERNMENT should tell people what to do with their bodies. You are the one that want government to meddle in the lives of individuals. You want a nanny state… you not me!

In the meantime make sure you are in line to get the jab… your precious nanny state is coming!

Albert was born in 1879. "Asperger's syndrome", as description of a medical condition, did not come into existence until 1976, 97 years after he was born. Not only that, but all forms of autism only become apparent after birth, not in the womb.

Similarly, Stephen Hawking did not show any of his ALS symptoms until he was 21 years old. I'm sure by this time, he had exited the womb.

In neither case would they have been aborted for medical reasons. Nor are their illnesses those that would be used as reasons for a medical abortion.

But imagine all the people who have over-active imaginations, or depression, or other psycho/physiological conditions, that get moderated via modern pharmaceuticals, and therefore aren't likely to have the exceptional and creative inspiration that is not part of the 'normal' and 'average' life experience.

A sedated, moderated and un-exceptional planet is a more likely reason we would not have geniuses, rather than abortion.

Does she have to be breastfeeding for that to take place?


That IS a part of it.
Quit debating semantics and go find a nice martian structure thread .
I remember ....

They do not test for autism in the womb. Anyone that tells you they can is misrepresenting a test that is less reliable than the covid test. Literally they will not officially diagnose autism until at least 2 years of age, and anything prior they muddy up with some term like pre-autistic symptoms. Some doctors wont diagnose it until 4 years of age. Down syndrome and retardation on the other hand, yes, they can test for it pretty early. Its not that i am for or against the law so please do not misunderstand my rant as anything more than a request for clarification. What I am unclear on is how you are equivocating autism with down syndrome and retardation. And forget about whether einstein was diagnosed with aapergers or not, because he was not. I know that youbcan pull that infornation from the NIH website but they also say Isaac Newton had aspergers, and i find it hard to believe a person who died in 1727 was diagnosed with a condition discovered in 1940.

posted on Sep, 11 2021 @ 09:30 PM
link
You know what's the most ironic part of this argument? It is how you leftists/pro-murder people seem to think that if you give each other stars that that means your argument wins...

In fact, the nazis liberalized abortion and made it possible for all women, including minorities, to be able to murder their children if they could prove their children would be born with some defect. That proof only had to be showing someone in their family that had some form of defect. 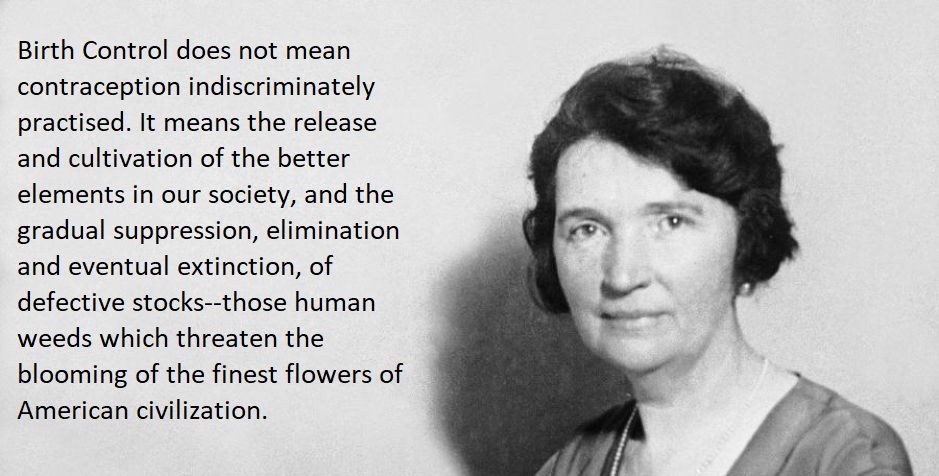 One of the essays of a nazi, Ernst Rudin, published by Margaret Sanger. The main idol of you leftists, to this day... Ernst Rudin whom argued for the murder of children and adults in nazi Germany and whose work led to the murder of millions of people... 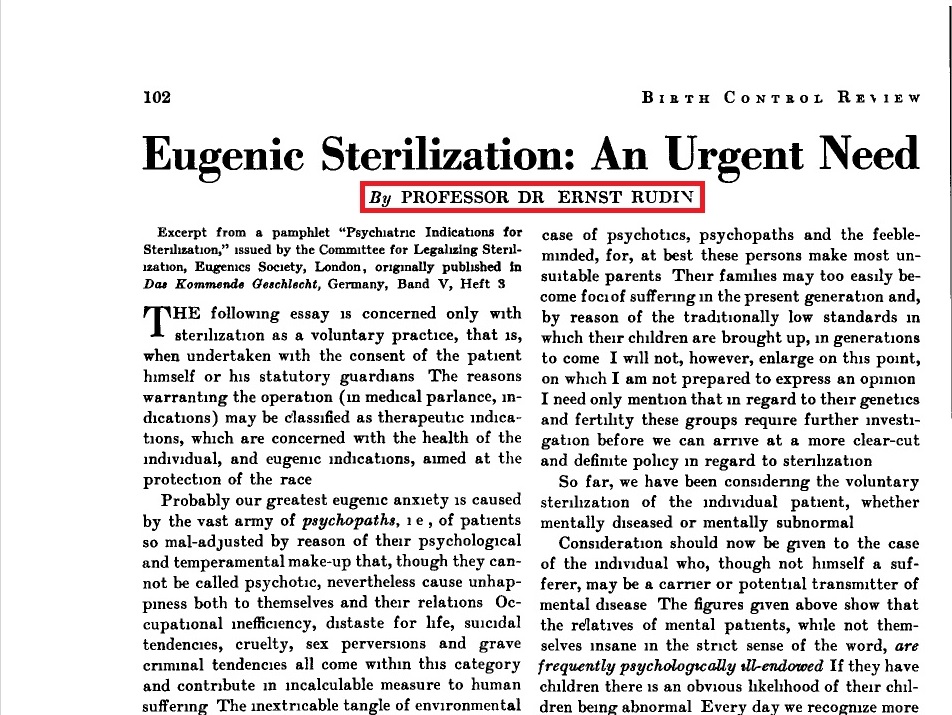 Sparta must be regarded as the first völkisch state. The exposure of the sick, weak, deformed children, in short, their destruction, was more decent and in truth a thousand times more human than the wretched insanity of our day which preserves the most pathological subject. Adolf Hitler

Keep on the good, in your minds, work of nazis people...


The only method compatible with our notions of civilization and the race is to prevent the breeding of the unfit by sterilization and the deliberate guidance of the mating instinct, Several European countries and a number of states of the American Union sterilize the criminal and the insane. This is not sufficient.