It sounds like if doctors express their own opinion on the China Virus "vaccine"...and that opinion is currently defined as "misinformation"...they will no longer be allowed to practice medicine.

This cannot be healthy.

The Federation of State Medical Boards warned July 29 that physicians and other healthcare professionals could be at risk of losing their medical licenses if they spread COVID-19 vaccine misinformation on social media, online and in the media.

The problem here is that...in addition to this being a gestapo-like tactic to shutdown free speech and dissenting opinion...the term "misinformation" is highly subjective.
Now, more so than ever, the term remains open to broad interpretation under quickly changing dynamics.

Many medical opinions on the virus and "vaccine" once called "misinformation" are now being proven to have been correct all along.

There are many more examples...but, even that is not the greatest concern here.

We need to see this for the Mob-like threat tactic that it obviously is...

"Nice little practice you've got here--It'd be a shame if anything was to happen to it."

Medical opinion and free speech is being muzzled and controlled...and any opinion that doesn't fit the current official narrative will just be surgically removed from any debate.

In the end...in addition to doctors being given the 'Sophie's Choice' of 'Speak your own medical opinion--or lose your livelihood'...it's we, their patients, who will ultimately lose.

At some point, everyone has probably heard a comment along the lines of, "Going to another Doctor to get a second opinion."

and why is that a common phrase? Because it is not all black & white. There are so many factors involved that you just cannot be 100% certain for every single person every single time. It just doesn't work that way.

And to what strict standards & guidelines must they abide by in order to prove said mis/disinformation?

or will they even have to prove it?


Even if this doesn't come to fruition, whichever Doctors or Administrators who think this is a good idea, should be immediately stripped of all of their licenses and credentials. It's nonsense.

posted on Aug, 9 2021 @ 09:02 AM
link
I'm going to guess this won't pan out. Even the evil lawmakers and policy pushers need doctors. There is already a lack of good qualified medical professionals.
Just make bad to worse
Now that I said that, I might be wrong.

When it comes to a patient "getting a second opinion" on the "vaccine"...second opinions that disagree won't be allowed.
edit on 9-8-2021 by IAMTAT because: (no reason given)

The threats have already been made.
Next up will be doctors having been made into examples to reinforce the threat.

posted on Aug, 9 2021 @ 09:09 AM
link
They should have adam schiff get up and read this to congress in his famous mafia voice.
Because thats all this is.

Where the hell is the line in the sand? Drs have to able to speak out.

We are not to far away from the cult of Fauci demanding these doctors be rounded up for re-education camps. 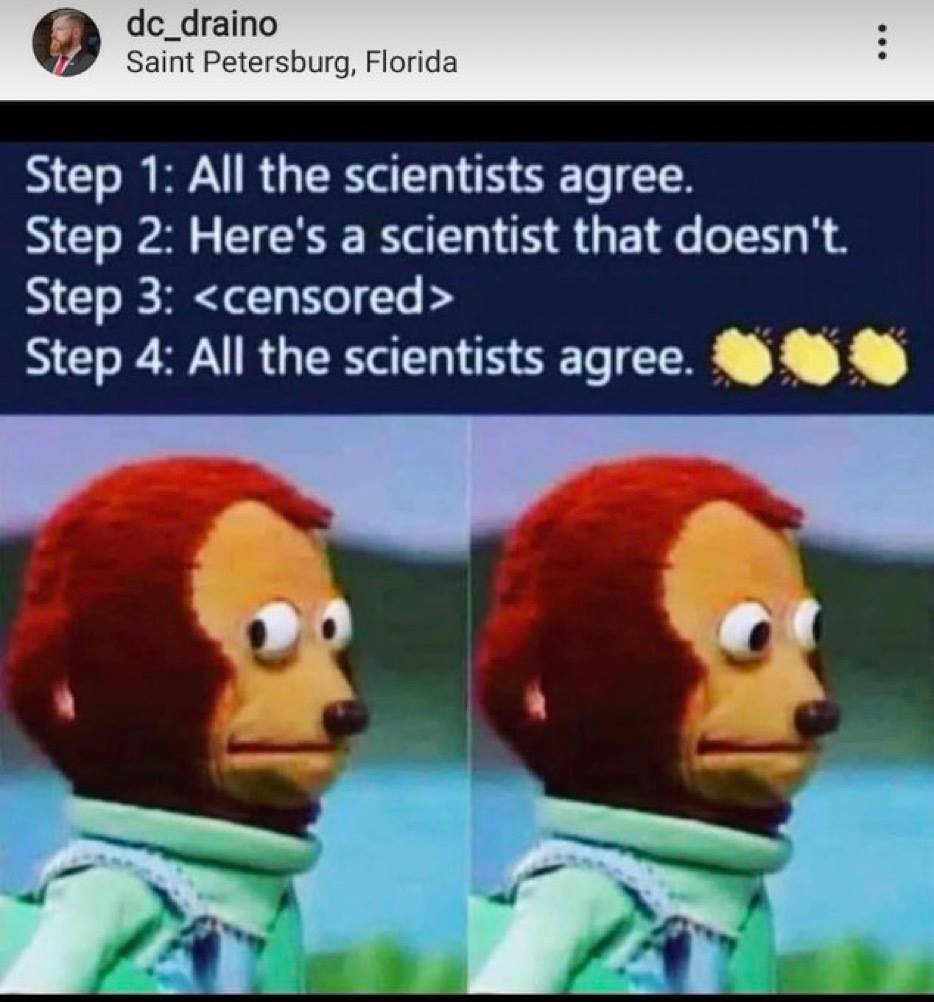 this can be fixed quick and in a hurry.

Under penalty of law, list all the benefits and side effects of the Covid Vaccine, this will be the last change made in the science behind it, what is written, will be in stone. Any deviation going forward will result in prison time, or death. A rough draft is due by Friday August 13th.

Wait, what? the science can evolve you say? It can't just be written in stone you say? But you can deem something misinformation TODAY and revoke a doctors license TODAY, based on information that may not be true?

Expose the idiots for what they are. Put them on the spot, hold their feet to the fire. make them either put in in stone, or admit this is a fluid situation and realize everyone has the right to do their own research.

posted on Aug, 9 2021 @ 09:30 AM
link
The good news is most Dr's are in the position to retire, and so they will speak out and risk an early retirement, and the system will collapse and the government and nazi eugenics vaccine pushers get left holding the baby looking like idiots

There are plenty of drs, pathologists, virologists, carers, nurses, etc all speaking out, and to my knowledge... ive only seen one or two lose their job, the vast majority haven't, and continue to attack the madness of lock-downs and forced vaccination

The Biden regime will probably sentence people to jail for what is deemed misinformation.

If they don't kill you with the vaccine, eventually they will find a way.
Death by a thousand cuts.

Spreading misinformation? Not following the narrative?
--Death penalty for you!!!

As I have said so many times... there is only one remedy: Patients Bill of Rights. Period.

Starting with the absolute inalienable natural right to say "yes" or "no."

But it always -- ALWAYS! -- begins and ends with protecting and promoting OUR rights.

This whole thing is infuriating on a level I struggle to deal with, the doctors who do go along with the narrative are pulling this insane bull #, a message I put on a telegram chat...

So as opposed to a Dr doing their damn job and protecting their patients from harm, this is what they told a friend of mine who has had vaccine complications in the past...

"I am confident that we can plan for a premedication regimen to facilitate proceeding with vaccination as the benefits far outweigh the risks."

And mention this is 4th Dr they referred them to an Allergist just cover their asses by doing this for me to get vaccine which they know I'll have reaction to.

The “doctors” are complicit in this crime and every negative reaction that happens will be on their hands.

This whole thing is infuriating on a level I struggle to deal with, the doctors who do go along with the narrative are pulling this insane bull #, a message I put on a telegram chat...

So as opposed to a Dr doing their damn job and protecting their patients from harm, this is what they told a friend of mine who has had vaccine complications in the past...

"I am confident that we can plan for a premedication regimen to facilitate proceeding with vaccination as the benefits far outweigh the risks."

And mention this is 4th Dr they referred them to an Allergist just cover their asses by doing this for me to get vaccine which they know I'll have reaction to.

The “doctors” are complicit in this crime and every negative reaction that happens will be on their hands.

posted on Aug, 9 2021 @ 10:22 AM
link
Interestingly, on another thread yesterday, an OP had his personal physician attacked for the fact that his physician recommended a medical exemption for him rather than he risk his life getting the "vaccine".

Because of that recommendation, he was told he should get another physician.

The patient's personal physician knows his patient's medical history and condition better than anyone...and that includes the FSMB...or any anonymous poster on a conspiracy site.

Big pharma, CDC and Fascist fauci information is real, you need to believe and is accurate that is all you need.

Doctors first hand on patients, observation after jabs and before jabs, working with sick china virus people and making opinions base on all this after a year, is missinformation

Wow the agenda is just on gear and by god you will be aboard or will be left on the side of the road to rot.

Can we stop this darn madness? and how.

posted on Aug, 9 2021 @ 10:46 AM
link
If I was a doctor, I would inform my patients that a vaccine is available and that they should make an informed decision in getting it. A lot of doctors are skeptical about this vaccine...and they have good reason to be skeptical. This vaccine does not attack the coronavirus, they never have been able to make a vaccine successfully to attack a coronavirus. It stimulates a buffered response against the spike protein, if is not a coronavirus vaccine. That is even how the adenovector vaccines work...notice Adeno and not corona in the name. It still makes a reaction against the spike protein.

Even with that, the mRNA vaccines have to be cut into two injections about a month apart, if they combined them there would be a hell of a lot more bad reactions to get the desired result.

I am not an anti-vaxer, I do have problems with some vaccines but I do believe lots of people need those vaccines that can cause me harm. In the case of this vaccine, I do not think enough scientific evidence is out there to prove it is safe, and it is definitely not safe for some individuals. If they knew how to figure out who was going to react badly to this vaccine, more scientific research may have led to that conclusion, they could have reduced the number of bad reactions. It was rushed too much, it is making guinea pigs out of millions of people.. I know I could have a severe reaction to it from reading lots of pure science instead of the propaganda that is being spread about it.

This virus is not safe nor effective for some people, and not enough research has been done on it to identify the risk groups. Also they are covering up the cases of severe side effects saying they are not related...because there is no evidence they are related. The reason there is little evidence of the vaccine causing damage is because they are avoiding verifying them to make it look safer for everyone. I know I cannot take this vaccine because I researched what causes my side effects with the vaccines and because I know from studying that I am pretty badly intolerant to the emulsifiers in the vaccine. But most people do not have years to study like I have had, trying to evaluate what food chemistries have caused them harm so they do not mistakenly have chosen the wrong chemistry to focus on for elimination. There are not simple blood tests given to test for these chemicals, doctors never test much for problems with propylene glycol, polysorbate 80, and polyethylene glycol. One reason is that these chemicals are in many pharmacutical products....no evidence means they remain generally recognized as safe....GRAS.

"We are so screwed."

originally posted by: IAMTAT THIS IS WRONG.


s&f - you're right. the level of coercion and threat is on a steep upward curve.