page: 1
51
<<   2  3  4 >>
log in
join
share:
ElectricUniverse
+26 more
posted on Jun, 9 2021 @ 11:34 PM
link
The following video is from a former Mao red Guard member, whom after finding out the truth about communism, after finding out about individual freedoms in the U.S. Republic, and after she realized China was a one party dictatorship she decided to leave that dictatorship. She is giving a warning. A warning similar to others, whom like me, escaped or left communism and a socialist economy.

Today only liars will attempt to deny that democrats are attempting to do the same in the U.S. as what happened in China, Cuba, North Korea, Venezuela, etc. Under the false claims of "defending voting rights" they want to deny only legal votes being counted so they can deny us all our individual rights, liberties, and freedom to every American as they try to nationalize our elections, nationalize and include socialist policies under "infrastructure bills", etc so only they and their communist tools can implement a communist dictatorship in the U.S.

This warning is for all Americans, including those of you in the left whom have falsely been led to believe this is for your own good, when it will only help democrats cement all power and to forever steal elections in the U.S. so only they win.

She warns Americans about embracing more and more "socialist policies" democrats, and even RINOs, are implementing, or attempting to implement in the U.S. Like millions of others, including myself, she is concerned because she sees the U.S. being turned into a similar socialist/communist system as that of China.

The video is only 23 minutes, and worth to watch to the end.

People need to learn the truth as to why democrats, RINOs and globalists have been attempting to make regular Americans believe the U./S. is a "democracy."

A democracy is a state which recognizes the subjection of the minority to the majority, that is, an organization for the systematic use of violence by one class against the other, by one part of the population against another.
Vladimir Lenin

Whoever wants to reach socialism by any other path than that of political democracy will inevitably arrive at conclusions that are absurd and reactionary both in the economic and the political sense.
Vladimir Lenin


all of the above quotes come from.
www.azquotes.com...


edit on 9-6-2021 by ElectricUniverse because: add comment and correct title.

beyondknowledge
+4 more
posted on Jun, 9 2021 @ 11:47 PM
link
Why would the biggest maker of stuff in the world want to attack their biggest paying customer?

They don't want to be the biggest maker of stuff. They want global domination. Making stuff is the thing to get them to the thing.

They are not interested in money. They are more interested in taking over the world. Money to them is just a tool to achieve their communist goals.

I was listening to this a few minutes ago and decided to
listen to the rest in the morning.
Have you heard about a retired Chinese general buying a
30,000,000 dollar ranch on the southern Texas border?The
ranch has an air strip,wind mill farm,meat processing plant,
and is 10 miles away from a major U.S. military base.Things
that make you go ummm.

I got you're back with this one but it's long OP. Give it the first fifteen and you have
the rest of it as it mostly doubles down after that.

posted on Jun, 10 2021 @ 12:22 AM
link
a reply to: Stupidsecrets
If that is true, what are they going to do with the world when they have it all. It will be so boring to not have an enemy. No need to prove your contries superiority in amy way. There will be no one to be superior to.

You mean the 130,000 acres of land the CCP bought right next to the largest U.S. Air Force training Base?

A company with ties to the Chinese Communist Party owns 130,000 acres of land in Texas—right next to America’s largest air force pilot training base.

The CEO of the company, Sun Guangxin, is a former officer in China’s People’s Liberation Army and one of the largest landowners in China’s Xinjiang province. And the land, purchased to build wind farms, actually sees little wind.

So what’s going on here?

And in other news, why should America be concerned about China’s emerging digital currency?

In this episode, we sit down with Kyle Bass, founder and principal of Hayman Capital Management and a founding member of the Committee on the Present Danger: China.


BTW, in the video you can also see a picture of the 4,000-5,000 feet runway for landing aircraft that the Chinese General, once a Chinese General always one, added to that land. Not to mention how close that land is to the Mexican border which is ideal for helping Chinese spies, or even troops, enter illegally into the U.S. and then go to that farm land in Texas.

I think we are both talking about the same area, but i could be wrong.

BTW, they claim they bought it 'for wind farms" but there is little wind there so it's obvious they bought it for other motives... The worst part is that China Biden and democrats want to help the CCP even more by making us dependent of their owning 80% of rare Earth elements needed to make car batteries for electric vehicles...

edit on 10-6-2021 by ElectricUniverse because: add and correct comment.

posted on Jun, 10 2021 @ 12:31 AM
link
a reply to: Randyvine
But what do you win? A people with no ambition to do anything beyond subsistance. No military hardware. No medical advancements. No showing off how much better our government is then that other one over there.

Politics is a game that requires at least two sides to play. All sides are dependant on the other for importance.

That's the one I heard about earlier today.I also heard they
want to build bigger windmills and hook them up to Texas
power grid.
I think someone should check out any land for sale near any
military base and see who buys it.

BTW, you should watch the video. There is a picture of 4,000-5,000 runway for aircraft that the General added in that land in Texas. Not to mention that that piece of land is close to the Mexican border, which means Chinese spies, or even troops could enter the U.S. illegally and they are close to that CCP General's land.

I am trying to get maps of the exact area and how close it is to the Mexican border.

I watched that video earlier today as well and I looked
up the ranch and saw the video connected to the sale.

originally posted by: beyondknowledge
a reply to: Stupidsecrets
If that is true, what are they going to do with the world when they have it all. It will be so boring to not have an enemy. No need to prove your contries superiority in amy way. There will be no one to be superior to.


They won't have it all but they are going to try. Every Empire that tried failed. Too many spinning plates. Romans got close but when forces spread out someone always gets a big head and thinks they should be the leader. Several times they got close but the same problem kept manifesting over and over. The CCP will also screw up. They have not been on the block that long, just long enough to get big egos.

posted on Jun, 10 2021 @ 12:44 AM
link
Found a map showing that the land bought by this communist Chinese General, or former General, is right next to the Mexican border and how close it is to the Air Force Training Base. You can judge by yourselves. 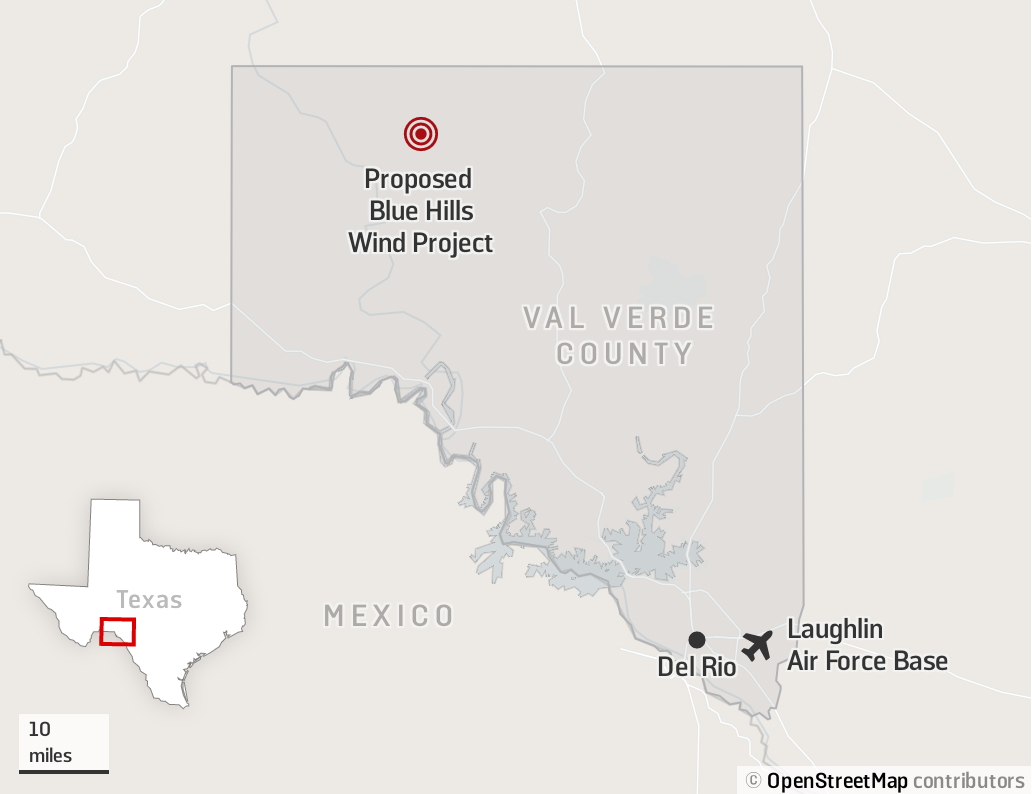 And here is an article showing that this is exactly the area we are talking about.

A Chinese company is evaluating its options now that Texas lawmakers have passed a bill to block it from building a wind farm in Val Verde County.

I'm going back to bed now,I will check back in the
morning.


Here is an article about the wind farms and military bases...www.wired.com...
edit on 10-6-2021 by mamabeth because: (no reason given)

posted on Jun, 10 2021 @ 12:52 AM
link
A couple of more detailed articles about the proposed wind farm that the Chinese General is still attempting to build. but the map is the same as the one I already gave.


Deep in the Heart of Texas, a Chinese Wind Farm Raises Eyebrows


...
The wind farm project, known as the Blue Hills Wind development, is being managed by GH America Energy, the U.S. subsidiary of the Chinese Guanghui Energy Company according to a 2020 report by Foreign Policy. The project entails the purchase of around 140,000 acres of land located about 70 miles from Laughlin Air Force Base. Guanghui Energy is owned by Sun Guangxin, a Chinese billionaire who reportedly has ties to the ruling Chinese Communist Party.
...

Former Secretary of State Mike Pompeo delivered several speeches (ignored by the corrupt complicit MSM) describing specific actions being taken by Chinese Communist "infiltrators". He even named Governors who China has significant influence over. fyi: Election riggers Kemp-GA and Ducey-AZ, are two of them.